You are at:Home»Current in Carmel»Carmel Community»Carmel High School grad uses photography to help the world 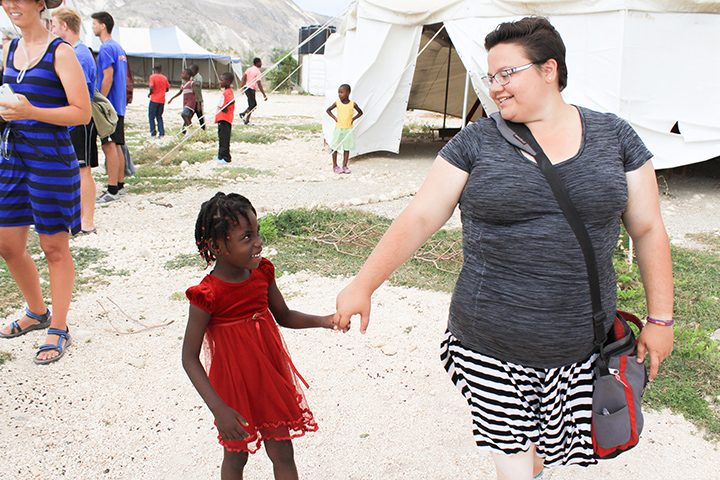 Allison Mayer, right, plays with a girl from the children’s home at Nehemiah Vision Ministries in Onaville, Haiti. (Submitted photo)

Allison Mayer has found a career to share her passion for photography and helping others.

“I work with nonprofits and (non-governmental organizations) to tell the stories of what they do and the people that they help through photography, videography and journalism,” Mayer said.

In her travels, she wants to tell those affected’s personal stories.

Mayer has been doing humanitarian work for three years and a has been a photographer for nine years, originally doing weddings and portraits.

“I have three more years on my five-year plan to be (published) in National Geographic (magazine),” Mayer said.

The first trip Mayer took was with her church, St. Elizabeth Ann Seton Catholic Church, to Haiti in 2012.

“That trip started the whole thing for me,” Mayer said. “I went as a photographer, but it was me just volunteering my time.”

She researched Haiti but found it was nothing like she thought it would be.

“I expected everything to be sad, depressed and despair and overwhelming poverty everywhere, which there is,” Mayer said. “But the people themselves are hopeful and joyful. I found that part of the story hasn’t been told (in the media) because it wasn’t as sexy. It’s definitely the worst place I’ve been and in some ways the best place.”

Mayer had planned to go to Haiti this month but the Hurricane Matthew tragedy changed that. The storm led to more than 1,000 fatalities in the nation. She plans to go in mid-January to interview people about the effects international aid has had on businesses and how it hinders the community’s ability to rebuild.

“It had been my plan to move to Haiti, but so much of my work depends on a reliable internet connection and the ability to travel with ease,” Mayer said. “Haiti is still relatively unstable and lacks infrastructure in many ways. So I had been looking for opportunities elsewhere. The area of Las Lomas (outside Lima) is much like Haiti with its makeshift homes and lack of running water. But unlike Port-au-Prince, Lima is a very modern city in many areas. I can live near an area where I can serve marginalized communities but still have access to the modern conveniences that I need to share those stories with the rest of the world.”

She leaves for Greece Oct. 31 to head to the Oinofyta Refugee Camp with Adventist Medical Evangelism Network. She will spend two weeks interviewing and photographing Syrian refugees.

She spent two months in Peru working with Voices4Peru, an organization that keeps kids out of gangs and child slavery through soccer and educational programs.