You are at:Home»Current in Carmel»Carmel Community»Carmel author to release new children’s book

Roxy Morgan used to make up stories to tell her children at bed time. But it was her then 2-year-old grandson, Blake, that gave her the idea to share those tales. 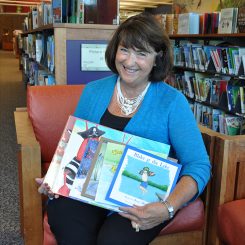 “I was telling him a story, and he had his back turned and said, ‘Read again, read again,’” Morgan said. “I had been encouraged to write down my stories before, but I thought this is the one to write.”

“My husband went on one hunting trip in his life and he got a moose, so Melvin hangs in our family room,” Morgan said.

Morgan told stories of the Lobster Klobster Family to her own three children, Anne, David and Beth. She has eight grandchildren (seven are boys).

“I’m lucky my children all moved back to Carmel and bought houses next door to each other,” Morgan said.

Morgan said a few friends had told her she should be writing down her stories.

“It’s a labor of love,” Morgan said. “It’s a hobby, but it’s opened so many doors. It’s been wonderful to see kids enjoy it and parents enjoy it.”

All the stories have a moral or a message, Morgan said.

Becoming an author was never her dream.

“I wanted to be on Broadway, but my folks were a little more practical,” said Morgan, who had the lead in two plays while at Carmel High School. “They decided I needed a job, so I chose teaching and loved it.”

Morgan, a 1966 CHS graduate, did her student teaching at Carmel’s College Wood Elementary and then was hired there. She taught four years at College Wood before starting a family.

“I moved here in 1957, and my husband (Chuck) is an original Carmel (resident) — five generations,” Morgan said. “(Chuck) was four years older. I was best friends with his sister, and the rest is history.”