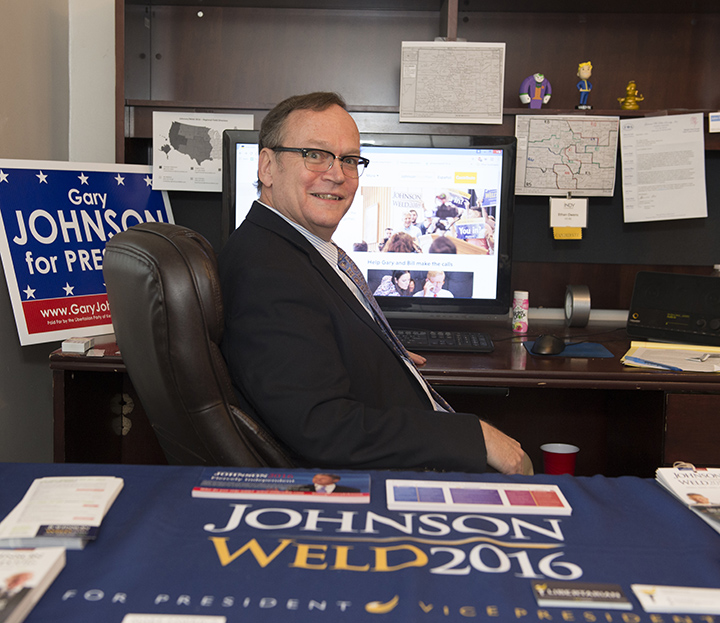 Joe Hauptmann of Zionsville is the state director of the Indiana for Gary Johnson campaign. (Photo by Theresa Skutt)

With voters running out of time to decide between Democrat Hillary Clinton and Republican Donald Trump, Zionsville’s Joe Hauptmann is working to promote another option: Gary Johnson, the Libertarian Party’s presidential nominee.

Hauptmann, the Indiana state director for the Gary Johnson for President campaign, knows a little bit about what it’s like to go up against Democrats and Republicans. He ran for Congress in 1998 and holds the national record for a Libertarian candidate against a Democrat and Republican by polling 11 percent against Dan Burton and Bobby Kern in 1998.

“I’m hoping this election I get knocked out of that chair,” he said.

Hauptmann expects Johnson to be the next third party candidate to rattle a system that has long been dominated by Republicans and Democrats.

“The fact that Democrat PACs are actually spending money attacking us is something new,” Hauptmann said. “It’s obvious that we are relevant. It’s an encouraging thing. It’s a wake-up call for all of the people who have been into the minor parties for a long time. It’s not just about educating people, and this is what we’re going to look forward to in the future.”

Hauptmann sees encouraging signs. He said he has almost 2,000 volunteers in Indiana interested in getting involved, most of whom are looking to be part of a campaign for the first time. For Hauptmann, having to get in touch with so many people is a good problem to have.

“My job, quite frankly, is the problem of an abundance of wealth,” Hauptmann said. “We’ve never had this many volunteers. We’ve never had this kind of positive reaction before. You would never know it from the media, but daily I have people walking into our office in Broad Ripple to get signs. I’ve never been out of the office more than a half hour without somebody stopping me with a positive comment. The response has been excellent.”

Although that may be the case, Hauptmann lamented that the system is “effectively designed so that there’s no chance of ever meeting the requirements.” Johnson is making a presence in the polls, but Hauptmann says that’s about all that can happen in this system.

Although he finds that discouraging, Hauptmann said the campaigns of Hillary Clinton and Donald Trump are opening doors for Johnson.

“Both of them are basically pushing the idea of look at how incredibly bad the other guy is,” Hauptmann said. “Therefore, the last thing they want is a rational third person up there to draw those votes. With Gary Johnson up there, it’s showing there’s a third choice. That does not play well into their playbook.”

Johnson has a playbook of his own, giving the Libertarian Party a louder voice and undecided voters another option. 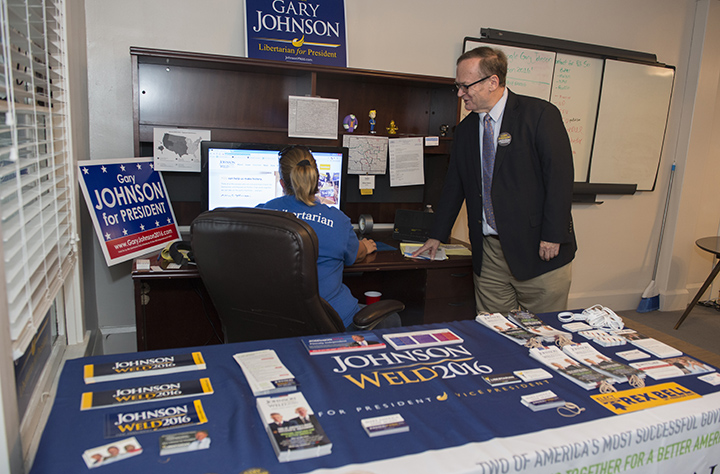 Joe Hauptmann and Alyssa Salgado of Zionsville at the Gary Johnson campaign office in Broad Ripple. (Photo by Theresa Skutt)

The results of those votes won’t be made known until Election Day, but Boone County Deputy Clerk Jessica Fouts said she’s seen interest in candidates other than Clinton and Trump.

“I’ve had several people call and ask, ‘How do I do a write-in?’ But as to who has done it, we won’t know until Election Day,” Fouts said.

In Zionsville and Whitestown, early voting is available at:

On Election Day (Nov. 8), polls will be open across the county from 6 a.m. to 6 p.m. Boone County voters may cast a ballot at any location in the county.