You are at:Home»Current in Carmel»Carmel Community»Finished trail allows pedestrians, bicyclists access across Carmel 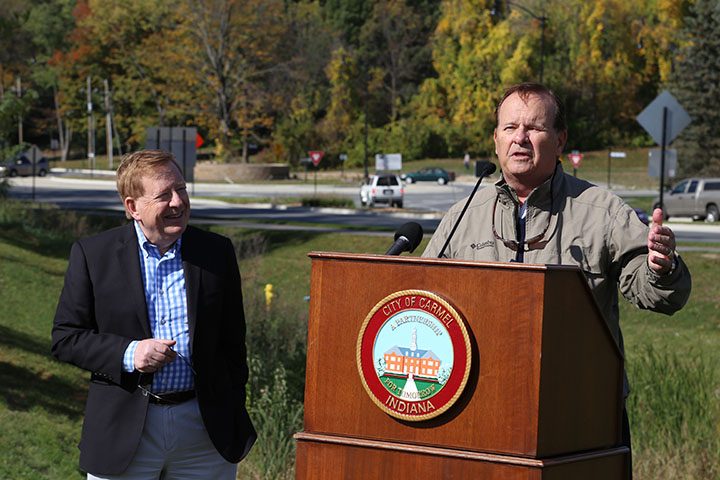 The City of Carmel celebrated the completion of a trail that stretches from Zionsville on the west to Fishers on the east.

Local officials and bike enthusiasts gathered along the path near 106th and Illinois streets Oct. 24 to celebrate the completion of the trail. Crews installed a bridge over Williams Creek just west of Spring Mill Drive to complete the project.

The trail runs east to west along 106th Street except through Home Place, which is not part of the city. Trail users can go north and south along Pennsylvania Street and College Avenue to 116th Street to reconnect to 106th Street.

“This is a tremendous connection today that we’re celebrating,” Mayor Jim Brainard said. “(It) allows everybody on the southwest side along 106th Street to be able to connect to the Monon Trail. If it weren’t for that little bit in Home Place, which isn’t part of Carmel yet, we could actually say it goes all the way along 106th Street from Zionsville to the White River.”

“We know that millennials, the elderly and lots of groups of people today want to be able to travel by bicycle,” he said. “We joke about not having any mountains or oceans, but the fact that we’re flat is something that helps us when it comes to biking. We don’t have a lot of hills.”

Ron Carter, a six-term member of the Carmel City Council, said the completion of the trail is “another giant step” toward fulfilling a dream of connecting the city to its neighbors and beyond. He hopes that the Farm Heritage Trail, a proposed 50-mile pathway along the former Big Four Railroad that stretches from Zionsville to Lafayette, will become a reality and connect to Carmel’s trail system.

“If that happens, people in Carmel, Fishers and Zionsville would be able to ride all the way to Lafayette and (enjoy) a really neat experience for themselves and their children in the coming years,” he said.