You are at:Home»Current in Zionsville»Chicago Cubs trip to the World Series good for business at Rush on Main 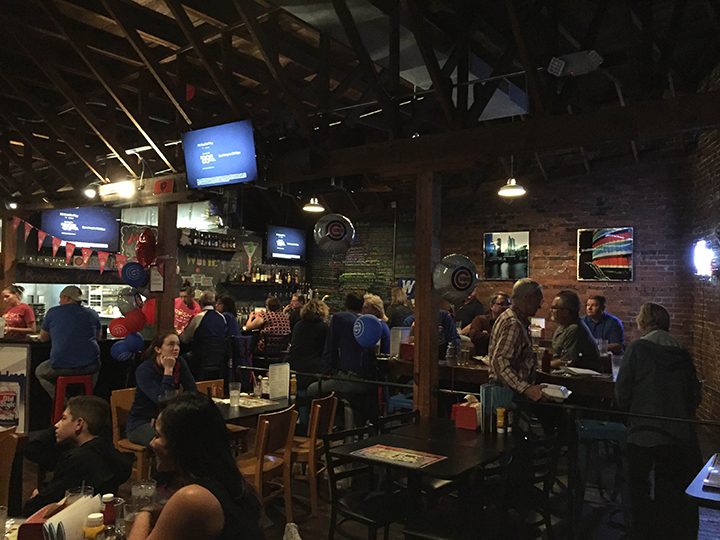 In January, Zionsville neighbors and Cubs fans Jeff Sepiol and Johnny Vargo had an idea to start a Chicago-themed bar.

Rush on Main opened in March, just in time for baseball season. Little did they know, it would be a historic one for their success-starved favorite team. With the Cubs seeking their first World Series win in 108 years, business has been good.

“The reception has been great,” Sepiol said. “The support in this community has been unbelievable. It’s a little overwhelming. We’re really fortunate.”

Sixty-plus people packed into Rush On Main for Game 2 of the World Series Oct. 26, which Sepiol said was “the slowest Cubs postseason game we’ve had.” The restaurant includes photos of Wrigley Field and Chicago landmarks as décor throughout the space.

As customers waited for an appetizer, Sepiol came over and put a piece of wax paper down, serving as a placemat.

The crowd, clad in Chicago Cubs garb, roared as the game began. Waitresses wore small Cubs flags in their hair. Sepiol donned a backwards Cubs cap as he went table to table speaking with fans.

Guests ooh’d and ahh’d to big hits and strikeouts during the game, drinking their beers and eating everything from the Slammin’ Sammy, a ham and cheese sandwich, to Da Fridge burger, equipped with three patties and three types of cheese.

“Back in March and April, Johnny and I were, ‘Hey, what if the Cubs go to the World Series?’ and here we are,” Sepiol said. “It’s surreal.”