Post traumatic stress disorder isn’t often something that is associated with law enforcement. 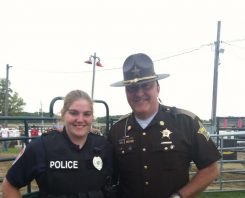 But it’s been brought to the forefront locally as Lebanon Police Officer Taylor Nielsen, daughter of Boone County Sheriff Mike Nielsen, is recovering from PTSD after investigating the case of a Zionsville mother and her son shot to death in February.

On Oct. 21, Taylor Nielsen took to Facebook to share her text to friends that read, “Please help me,” which she credits with saving her life.

“This text is what has been going through my head for the last 8 months that I have wanted to scream to someone,” she stated. “I feel like we try to speak but are silenced by the stigma associated with mental illness.”

“I am a broken man. We will heal from this with God’s grace, prayer and the right treatment,” Nielsen continued, along with a plea for mental health care for police officers. “Police officers feel that showing emotion is a sign of weakness.”

He also stated that his daughter wanted to share her story to save other lives.

“Our job is confrontation, conflict and trauma. We see people at their worst,” he said. “That has to take a toll on us.”

Warmoth said that his department is constantly updating training and will be adding PTSD courses for supervisors in the near future.

“Every incident is going to be a learning situation for us,” he said.

Through Facebook Mike Nielsen thanked the community for support and encouraged others to spread the message about PTSD, hoping to help at least one person.

“Please help us continue to raise awareness for this,” he stated. “We need to help people fight.”