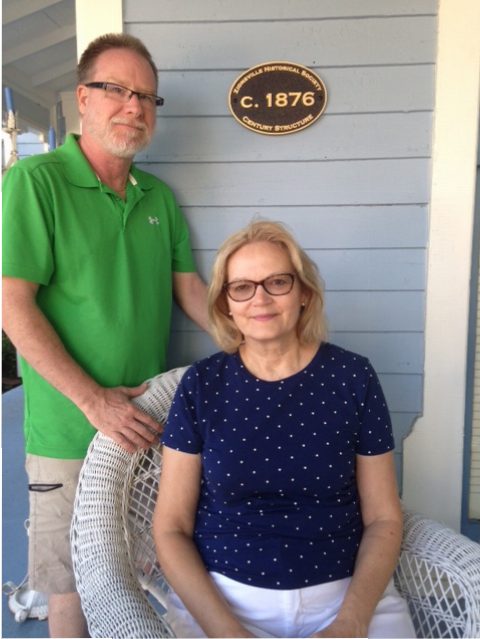 Brad and Monique Schnabel with their Century Structure plaque. (Photo by Heather Lusk)

The 20th Century Structure in Zionsville has been designated to Monique and Brad Schnabel’s Main Street home built in 1876.

After living in her home for nearly four decades, Monique Schnabel finally decided this year to complete the application in order to have her home considered.

In order to be considered, a structure must be at least 100 years old with “an exterior that hasn’t been unreasonably altered,” according to the application.

The award is presented by the Zionsville Historical Society, which initiated the Century Structures program in 1987 with a purpose to “designate, recognize and honor historic homes in the village.”

“Homeowners who choose to take the time and energy to preserve what was, rather than to simply build new structures in a particular architectural style, deserve to be recognized for their efforts,” said Lynne Manning, president of the Zionsville Historical Society.

“It’s knowledge that’s going to be lost if we don’t document it somehow,” Brad Schnabel said.

To complete the application, the Schnabels researched their home’s history using local resources at the Hussey-Mayfield Memorial Public Library and the Boone County Courthouse.

The couple also found a website listing Sanborn maps showing the location of all buildings in a certain year, created to estimate fire insurance risks. The Schnabels were able to identify their home on an 1895 map.

“It’s interesting to see the footprint,” said Monique, who added that over the years the porch changed and a shed was added and removed.

The Schnabels had the home’s abstract, which helped significantly.

“(Homeowners) assume this will be an insurmountable job, but it isn’t,” said Monique Schnabel.