You are at:Home»Current in Zionsville»Young yogi: Creekside student works to inspire others through yoga 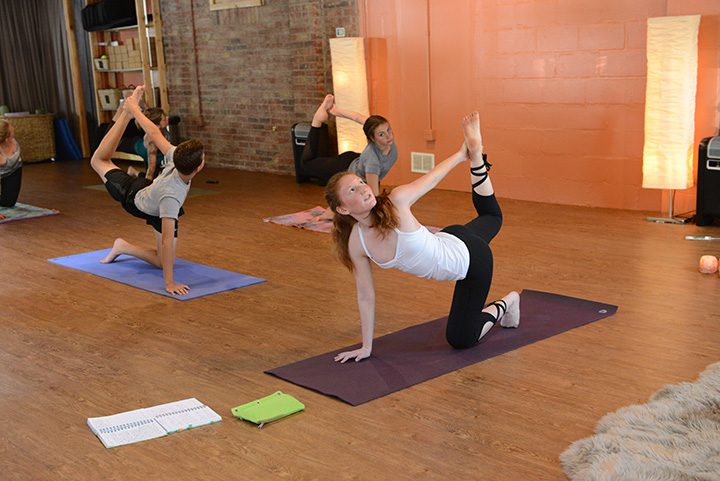 Anna Limauro, 13, of Carmel teaches a yoga class at Blooming Life Yoga Studio in Zionsville. Limauro is among the youngest yoga instructors in the state. (Photo by Theresa Skutt)

While many teens are characterized as moody and overdramatic, Anna Limauro is working on being the opposite. The 13- year-old Creekside Middle School student, who recently became certified as a yoga instructor, is hoping to share yoga techniques with other teenagers to help give them confidence.

In May Anna registered with Yoga Alliance, the nation’s largest teacher registry, after completing the Torchbearer of Tradition program. The new program, created by Zionsville-based Blooming Life Yoga Studio owner Lily Kessler, is aimed at youth aged 12 1/2 through 18.

The Torchbearer of Tradition program was initially created by Kessler because Anna was interested in participating in the 200-hour adult program.

“She just seemed incredibly dedicated,” Kessler said. “She has this insatiable curiosity.”

Anna was first introduced to yoga through a workshop aimed to increase girls’ confidence. She started taking youth yoga classes, then taking it more seriously began attending adult classes in Zionsville and Carmel.

Ideally Anna would like to incorporate the history and philosophy of the poses when she teaches and wants to bring the feeling of confidence and acceptance that she first learned.

“I could see Anna being a master yogi,” Kessler said. “She is very interested in the philosophical aspects and the ways that they link traditions, cultures and world philosophies together.”

Lily Kessler was concerned that some of the adult conversations would be “inappropriate” for youth and instead decided to create Torchbearer of Tradition, the first yoga program specifically for teens.

The 200-hour course covered everything in the adult program, but Kessler expected to keep the conversations at a less adult level.

Instead Kessler discovered that the teen conversations were tougher than some of her adult classes.

“It was such an eye-opener for me of what kids are going through,” she said. “They are surrounded by drugs, alcohol, huge peer pressure, risky behaviors, suicide.”

Kessler feels that the safe environment of the yoga studio helped the teens cope with decisions and offer others advice.

“They started to step above and witness what was around them rather than be entrenched in teenage drama,” Kessler said.