You are at:Home»Current in Fishers»The Future of Law Enforcement: Mitch Thompson becomes the chief of the Fishers Police Dept. 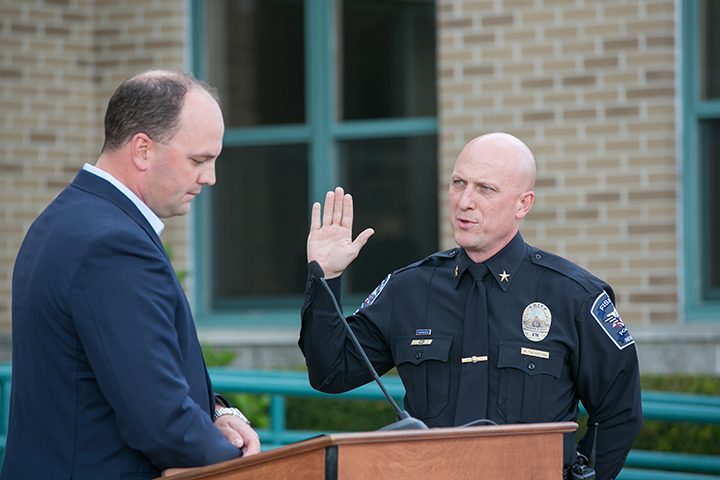 For nearly 40 years, the city has known only George Kehl as the Fishers Police Dept. chief. Kehl has retired and former Assistant Chief Mitch Thompson now wears the chief’s badge. Current in Fishers caught up with Thompson to learn about his history and the future of law enforcement in Fishers. 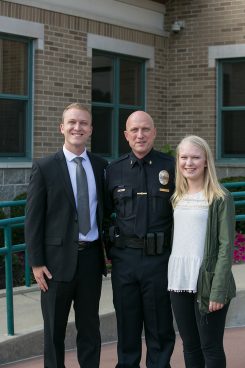 Mitch Thompson with his kids, Chase and Riley. (Submitted photo)

When did you know you wanted to get into law enforcement?

“I had no desire growing up to be a police officer. I grew up in the west side of Indianapolis and went to IU as a business major like everybody else back in the 80s, and I took a criminal justice class to fill a general requirement for my degree. A police officer came in to recruit for the IU police program, and he talked about how much he loved being a police officer because of providing service to others, and his work environment changes on a daily basis. I was just like, ‘Wow, that sounds like something I would like.’ I went to Ritter High School, and in Catholic schools you have to do a lot of public community service, and I really enjoyed that. That resonated hearing that officer talk about service to others as a career.”

Was it different from what you expected?

“I came to fishers January 1991, and immediately the prevailing thought of work here was we provide service to the community. Chief Kehl was huge on that. We were all about service and being involved in our community, so that was fantastic.And also, you know, you catch bad guys. We began the D.A.R.E program that year in (Hamilton Southeastern) schools, and I was able to be in that from the ground up and served as a D.A.R.E officer for 12 years. When you work the street, you have ability to affect people one-to-one. As I was able to advance through my career in promotions, my ability to mentor other people allowed me to reach other people in the community. Those that I supervised helped those in the community.”

From the beginning of your career at Fishers, did you plan to become the chief?

“Oh gosh, no. My desire was just to do the best I could in whatever role I was in, and things will come your way. You just do the job the best to your ability.”

Do you miss being a street cop?

“Yes. Without a doubt, my heart is in patrol. I worked as a patrolman and a sergeant on second shift patrol, and I absolutely love patrol. It’s just when the weather’s great, it’s great to be outside and communicate with the community, and then when you hit those evening hours, activity picks up on Friday, Saturday nights.”

Will you be following in Chief Kehl’s footsteps, or is there a different path you want to take?

“Chief Kehl has established a legacy of serving the community and loyalty within the agency, and my job is to continue the legacy Chief Kehl has established and also look forward to the future of policing in Fishers. Right now, policing in America has never been more challenging with everything going on, and honestly, it’s not as easy to recruit police officers as it used to be. We are fortunate of where we are. Iit’s been a great place to live and raise a family, so we are getting quality applicants. With everything going on in America, policing is going to change. While some people fear that change, we embrace that change. Whenever there’s a challenge, I see an opportunity to move forward. When things have gotten tough in policing, we get a lot of support from the community.”