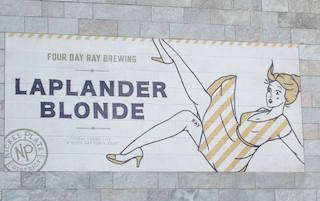 The Laplander Blonde advertisement on the side of Four Day Ray. (Submitted photo)

Some Fishers residents are speaking out about an advertisement on the side of the new Four Day Ray Brewing Co. building at 11671 Lantern Rd. The image is the logo of the Laplander Blonde, a signature brew, and depicts a women falling. Some residents feel it’s inappropriate for the family-focused Nickel Plate District.

“The simplest reading of the image is that the pale, conventionally “pretty” i.e. thin-waisted and large-bosomed, flailing woman with a distressed look on her face is sexualized and misogynist,” Fishers resident Beth Clark said. “Should we celebrate women as weak creatures who fall down or are victims of circumstance? Should we promote a cultural idea that it is okay to victimize women?”

For its part, FDR describes its theme as railroad inspired.

“We apologize to anyone that is offended because that is certainly not our intent,” said Brian Graham, founder and president of FDR. “This was the first beer that became our flagship beer. A lot of beers’ names are railroad jargon. The name of the brewery is a rail term. It refers to a railroad worker who habitually calls off work one day a week. We’re in the Nickel Plate District so a lot of this ties back in to the railroad theme. A Laplander is just a term for someone standing on a train and it abruptly comes to a halt and the person stumbles and falls over into someone’s lap.”

Clark feels another beer should have been chosen to represent FDR’s brand.

“The image for their Track Jumper beer would be a much better choice to represent the business in an area near the tracks of the once famed Nickel Plate Railroad. Track Jumper more clearly aligns with railway terminology,” she said.

Graham added the marketing firm that designed the logo is owned by two women and that FDR is a family-friendly restaurant and brewery.