Longtime friends Lynne Manning and Marianne Doyle have been talking about having their own theater group for 18 months. 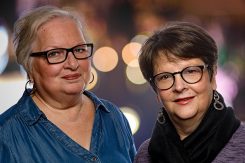 It has now come to fruition as they have formed the Zionsville Little Theatre Company.

“We’re looking at doing two productions a year at this point,” Manning said. “We’re seeing how we can expand into classes and workshops.”

Manning, who has served as a director at Off-Main Street Players in Zionsville, is the Drama Club sponsor at Zionsville West Middle School. Doyle’s speciality is costume design.

“Marianne has done several costumes for me for Off-Main Street Players, as well for the middle school,” Manning said.

Manning and Doyle are producing the first show. Manning said they are exploring the possibility of becoming a nonprofit at some point.

“I’m directing it and was able to adapt the script form Louisa May Alcott’s book,” Manning said. “We’re very excited about the cast. We have a good group of people.”

Manning and the four actresses playing the March sisters recently gathered together to watch the 1995 version of “Little Women.”

“That was to give them an indication of the time period and the sensibility,” Manning said.

Rehearsals began Oct. 23. Tickets are $12 and will be available at the door. The Facebook page is under Zionsville Little Theatre Company.