You are at:Home»Current in Carmel»Electric bike shop opens 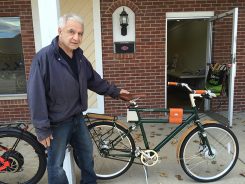 David Tortora is convinced electric bikes will grow in popularity.

“We’re pretty sure we’re pretty unique in that we only sell electrics,” said David Tortora, who has lived in Carmel for more than 25 years.

“We think we have a nice selection of bicycles, and there is usually a couple of us here who can talk about the bicycles,” Tortora said.

The shop will only be open limited hours for walk-in traffic.

“We can only handle three prospects at a time, but we are open (anytime we agree to a time),” said Tortora, who added he is flexible and will come in later in the evening. “We can get any kind of electric bike. We have six different brands right now. If you are going to make a purchase like this, you want to make an educated purchase.”

There are approximately 50 bicycles at the store.

Tortora, 75, started selling bikes after he retired, at first doing it from his garage.

“I’ve ridden bikes all my life,” Tortora said. “I had fun doing it. I have fun doing this now.”

Tortora is an avid electric bike rider himself.

“Electric bikes on the East and West Coast are very popular,” he said.

The shop also rents electric bikes. Most ages can ridge the bikes, but he recommends parents approve teenagers riding some of the faster ones.

“Some of the bikes are very, very fast,” Tortora said.

The pedal assist is the most popular form of using electric bikes, Tortora said. Most  bicycles go at least 15 mph.