You are at:Home»Current in Carmel»Carmel Community»Carmel Plan Commission to discuss Sun King building on Oct. 18 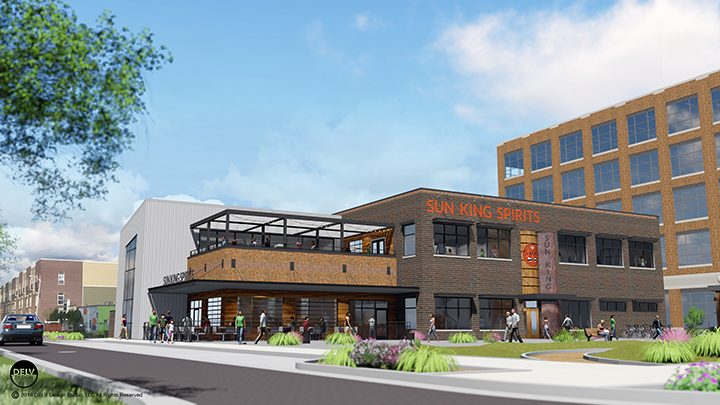 Sun King Brewery announced on Sept. 7 that a new tap room and distillery would open in Carmel’s Midtown area in the fall of 2017. Old Town Design Group, who is partnering with Sun King, is on an aggressive schedule to finish the building in a year with plans already considered by the Carmel Plan Commission.

Old Town submitted an application to the plan commission on Aug. 19, before the announcement was made public. The initial application shows architectural renderings of a building nearly identical to the Sun King building renderings revealed at the Sept. 7 announcement, but the name and logo are missing. On Oct. 7, a more complete packet was submitted to the plan commission for the two-story building, which will be at 320 1st Avenue SW.  It will have 15,000 square feet of space for the craft distillery, which is a first for Sun King, a well-known Indiana brewery.

The technical advisory committee discussed the Sun King building on Sept. 21 before it was sent to the full plan commission to consider on Oct. 18. Landscaping has already been approved, and developers are getting ready to start detention.

The new distillery and tap room will accommodate approximately 300 patrons indoors or on an outdoor rooftop deck overlooking the Monon Trail and Midtown Plaza.

Old Town Design Group is currently working on a $100-million-plus transformation of the area along the Monon between the Carmel Arts & Design District and the Carmel City Center.