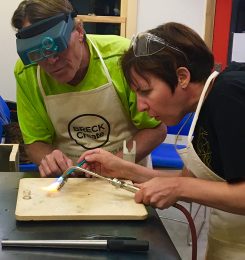 In early October, he spent several days at a festival in Houston. His best experience was being chosen as a resident for a month in Breckenridge, Colo., Arts District in August. He spent six weeks in Colorado.

“They have 450 applications and they selected 17 for the entire year. From that they chose three people to get an entire month as resident,” said Grosser, whose store is M Grosser Jewelry Design, 154 Medical Dr. “We were at art festivals that were there on both ends of the residency in Breckenridge.”

Grosser was set up in a gallery/classroom with all his jewelry-making tools.

“I was able to do all the things I do in my store in Carmel in Breckenridge,” Grosser said. “It was exciting and a lot of fun.”

Grosser said there are many restored buildings that have been brought in and moved to the Breckenridge district. Grosser was in a building that was a tin shop in the 1880s. Grosser said the buildings are used as classrooms.

“I was in the middle of this whole historic district,” Grosser said. “I taught five classes and I was part of one demonstration of wax carving.”

Two of the classes Grosser taught were for beginners.

“I taught some harder classes that brought some people from farther away,” Grosser said. “I taught a setting class, where I taught them how to set stones. I did a wax carving. It was successful. I was treated as a fellow respected artist, and people wanted to meet us.”

Grosser was assisted by his fiancée, Paula Ritchey, who helps run his business. His Carmel store is by appointment only, so it was closed while he was in Breckenridge.

“Most of my customers know that I do these art shows all around the country,” Grosser said. “People were very supportive of it. We had a lot of consumers waiting to get things done. But I think our customers enjoyed that I had been chosen to do this.”