You are at:Home»Current in Westfield»Advisory Plan Commission forwards The Trails to city council with a positive recommendation, 5-0 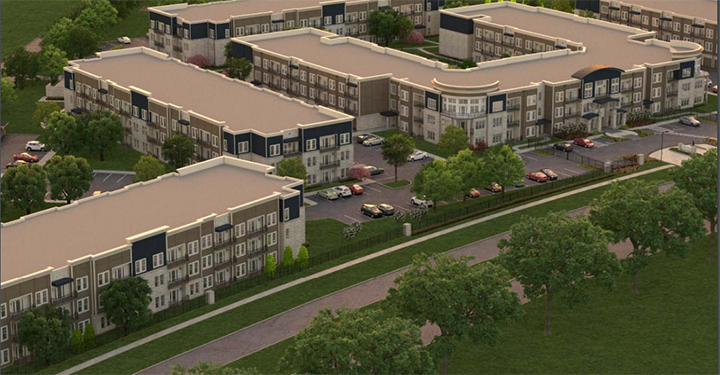 A rendering of the multi-family apartment complex. All apartment buildings have a minimum of three stories, with 25 percent of the apartments a four-story building. (Submitted renderings)

Hinging on city council decision, Westfield may see high-rise apartments and commercial development along 21 acres at the southeast corner of Ind. 32 and Oak Ridge Road in the future.

The location of the proposed development.

The plan commission held a public hearing for the development at its Aug. 15 meeting, and at its Oct. 18 meeting, the advisory plan commission forwarded The Trails Planned Unit Development District onto city council with a positive recommendation. Developer Birch Dalton, of EdgeRock Development, made a presentation regarding the apartments and the commercial area, which is expected to include a Starbucks, Which Wich, Wings, etc. and a Crew Carwash.

“This is a serious apartment development from the quality of work like Bridgewater,” Dalton said. “They view this as the same, if not higher, rent area because of Monon, Midland Trace (trails) and all other amenities.”

“One (of my concerns) was the Starbucks architecture and how that would tie in with the rest of that proposed building there,” Hoover said. “I know that’s something you’re working on, and I can assure you that was my number one concern, that it’s going to have to look good to get my vote at the council level. The other concern was the apartments. The renderings that were shown two weeks ago as attachments to our agenda I did not feel were the level we wanted to see here, but I think what is shown now does appeal to me. I think it is something different than just standard apartments to me. It looks good and more of a downtown setting. All (apartments) have a minimum of three stories so we don’t get a typical sprawling apartment complex here.”

The development is expected to cost $35 million.