You are at:Home»Current in Carmel»Carmel Community»Carmel resident nominated for Wuerffel Trophy for contributions on, off the field 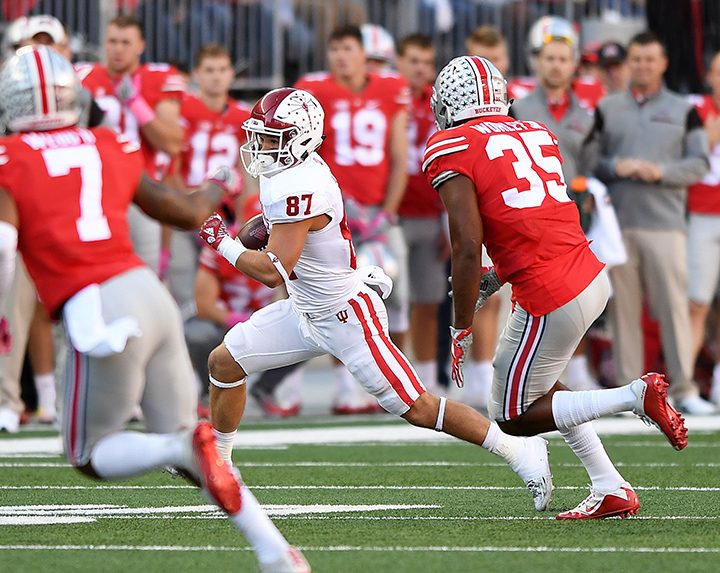 Mitchell Paige has been nominated for the Wuerffel Trophy. (Submitted photo)

Not many people become college athletes, but even fewer can say they have been nominated for one of college football’s most prestigious awards.

Mitchell Paige, 23, a senior wide receiver at Indiana University, is one of the few. The Carmel resident has been nominated for the Wuerffel Trophy, awarded by the NCAA to a Division I player who excels on and off the field.

Past winners include former University of Florida quarterback Tim Tebow, who won in 2008, and Sam Acho, a linebacker for the Chicago Bears, who won in 2010.

Paige, who graduated from Guerin Catholic High School, makes an impact on the field for the Hoosiers and in the community, finding time to volunteer at local elementary schools.

“You have to make time for things that are important,” Paige said. “For me, it is service.”

Mike Pechac, director of player development and academic enhancement for football at IU, said Paige does not hesitate to help, recalling a conversation they had after a tornado tore through Kokomo in August.

“He said, ‘Coach, can you try and find me somebody that I could go down there and work with? If not, I’ll just drive down there myself,’” Pechac said. “That is the kind of guy he is.”

Paige said receiving the award would be a bonus.

“It is really cool to get the nomination,” Paige said. “But the most important thing for me is just getting to do the stuff the trophy is even for.”

Paige said part of the reason he wants to volunteer goes back to his own childhood watching high school football in Hamilton County.

“Those kids on Friday nights were gods to me,” Paige said. “If I can just impact one kid’s life in a positive way, that makes it all worth it for me.”

The recipient of the Wuerffel Trophy will be announced Dec. 6 at the National Football Foundation’s press conference in New York.