You are at:Home»Current in Zionsville»Zionsville’s Sophia Joelle reflects on audition for The Voice

While many teens were hanging at the pool this summer, 16-year-old Sophia Joelle was in Los Angeles on the set of The Voice singing for Adam Levine, Miley Cyrus, Alicia Keys and Blake Shelton. 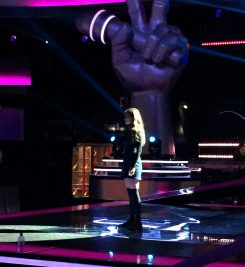 A segment of Sophia Joelle’s audition appeared on The Voice on Oct. 3. (Submitted screenshot)

“I was just really excited,” she said. “I felt I prepared really well and was just excited to do it after so long of waiting.”

Joelle sang as part of the show’s blind auditions. Her road to LA started with an audition for producers.

“I got the opportunity to audition in Chicago and thought, ‘Why not? The Voice is a big show,’” she said.

Joelle’s segment aired Oct. 3 – the last night of the blind auditions. Her mom, two sisters, a sister’s boyfriend and a cousin watched from backstage as she sang Sia’s Elastic Heart.

“I love Sia and the fact she does pop, but her lyrics have a lot of meaning, which isn’t common in pop now,” Joelle said. “The song has a lot of character and meaning to it, so I thought it’d be an awesome song to sing for audition.”

What she didn’t know as she sang was only Cyrus had a spot left on her team. In the end, no chairs turned for her.

“The first thing she (Cyrus) said is ‘America is going to love you when they see you. You’re so cute.’ Adam spoke a lot to the fact I was so young and had time to keep developing,” Joelle said. “Alicia was so down to earth and said I was so brave to come out here and do this at 15, that it was part of my journey, and I’d go on to do great things. Blake didn’t say much, but when I was shaking their hands he gave me a big hug and said, ‘That was amazing.’”

While only a small snippet of her audition made the show, Joelle said she wasn’t too disappointed because she knew 96 other singers who auditioned weren’t shown at all.

But don’t expect to see Joelle audition for the show again.

Her biggest takeaway from The Voice: “I think probably the confidence to walk away from something like this even though I am not on a team or on the show, and I know I did my absolute best and not being disappointed with that.”