You are at:Home»Current in Carmel»Carmel Community»Three Scouts from Troop 112 earn Eagle Scout rank 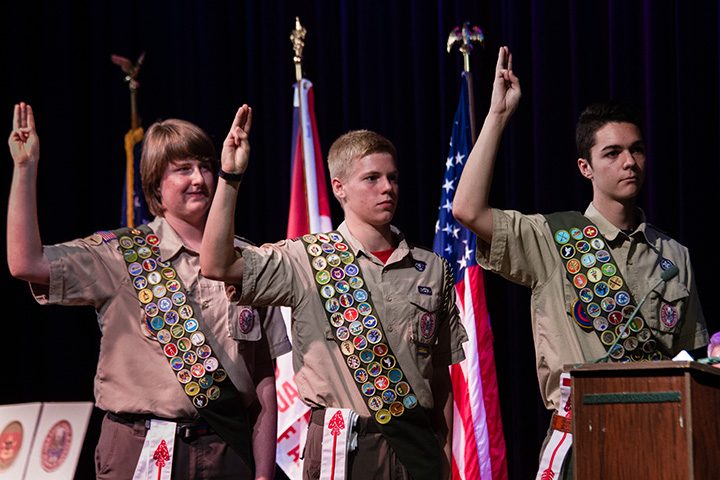 “I knew one day I would get Eagle Scout, it was just a matter of time,” he said.

His father, Scott, and his uncle, Tim, are both Eagle Scouts. Three Troop 112 members, Hamachek, Sebby Thatcher and Bryce Castle, were given their Eagle Scout badges Sept. 26. All three are Carmel High School students.

Hamachek, a junior, is in his sixth year in scouting. His project was to landscape the entrance at Wodock baseball fields, behind Carmel Elementary School. The fields are used by Carmel Dads’ Club.

“I used to be a soccer ref for Carmel Dads’ Club, so I wanted to give back to that facility,” Hamachek said. “I landscaped the entrance to sort of enhance the beauty.”

Hamachek said the Boy Scouts try to help each other out as much as possible to earn the Eagle Scout rank.

Thatcher, a senior, built five picnic tables for Noble of Indiana in Indianapolis.

“Noble is a not-for-profit organization that helps integrate people with learning disabilities into the workforce,” Thatcher said. “They have a work site where they hire clients. In this workplace, they didn’t have anywhere to break. If they wanted to take a lunch break inside, it would be super noisy. If they didn’t want to go outside, the only seating was in the smoking section.”

Thatcher has been volunteering for Noble of Indiana for a while and conversed with President and CEO Julia Huffman.

“We were able to see some problems that existed and how I could contribute to help,” Thatcher said. “It was a lot of hours planning and driving back and forth. It was definitely one of the most time-consuming projects I’ve done through my scouting career. It’s supposed to challenge you.”

Castle, a sophomore, built a 266-foot-long fence at Zionsville Presbyterian Church. Castle said it took 156 service hours in total. Castle chose to do the project after hearing some suggestions of work that needed to be done at the church.

“I finished it during fall break (in 2015), and then I did all the work and went before the board of review in February,” Castle said.