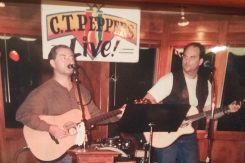 James Taylor has been playing in bands since he was a child. He played with Dave Smith, also of Carmel, in a band called Taylor and Smith in the 1990s. (Submitted photo)

James Taylor, of Carmel, has been playing in bands since he was a child. After serving in the U.S. Marines, he returned to Carmel in the 90s and formed a band called Taylor and Smith that played in Broad Ripple and other entertainment spots. He then moved on to IT work and stopped performing – until now.

Taylor recently submitted some of his work to reverbnation.com, where his songs quickly rose to the No. 2 regional spot, No. 8 in the Midwest and in the top 100 nationally.

“My intent now, I don’t really care that much to perform anymore, but I want to sell some songs. That’s my goal, but in order to do that you have to get in front of people,” Taylor said.

He recently received recognition from Samantha Cox of Broadcast Music. Inc. in New York, and he was invited to play a songwriter’s show at the Bitter End in New York City.

“This reverbnation.com, I jumped on that a month or six weeks ago and started getting a lot of attention … I thought it would be cool to write locally,” he said. “Now my goal is to be the most popular musician who is over 60. It has reignited my interest in getting out there again. Even locally, it’s got me thinking of going out and doing some shows.”

Taylor plays guitar and sings. He said his style ranges but deviates more toward rock, pop and acoustic. Taylor said he is more comfortable playing with some backup. If he starts performing seriously again, he may add another member or two.

For his music, visit reverbnation.com. His music is listed under the James Noble Band.