You are at:Home»Current in Carmel»Carmel Community»Historian to present Carmel’s ‘darker times’ 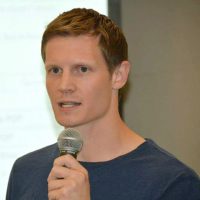 Andrew Wright won’t be telling the typical horror stories for Halloween this month.

Instead, he will discuss some of the deadly accidents and crimes that occurred in Carmel from 1890 to 1955.

“I felt there was a void in our history about some of the bad things,” Wright said. “Everything I read it was quiet Quaker village, lots of Quakers that farmed and lived pure lives. I thought surely something that went on that was to me more interesting.”

Wright, a 35-year-old historian for the Carmel Clay Historical Society, will give his presentation on  “The Darker Times of Carmel” at 7 p.m. Oct. 20 in the Carmel Clay Public Library’s Program Room.

“We go through some of the disasters in the early history, some train accidents,” Wright said. “There were three explosions in Carmel. One of them caused the fire of 1913 in downtown Carmel.”

The large train wreck in 1890 will be at the start of his presentation.

“The Monon train fell through the bridge, caught on fire and (several) people died,” Wright said. “It was a horrific scene.”

In addition, Wright will speak on three bank robberies, one of them committed by Harry Lee Watson.

“He was probably a more prolific robber than (John) Dillinger,” Wright said.  “He robbed dozens and dozens of banks. He only confessed to 15, but he robbed a lot more than that. You could write a movie about his life. He was charming. He carried around a scrapbook with letters of praise from judges and a county sheriff.”

Watson, a Depression-era banker, robbed a Carmel bank in 1929. He was later captured and died in prison in 1933.

“I also discovered a blackmail attempt by a Carmel resident, trying to blackmail three prominent citizens (in 1928),” Wright said.