You are at:Home»Current in Westfield»Haunted History: Nicole and Michael Kobrowski host ghost tours around the city, nearby counties 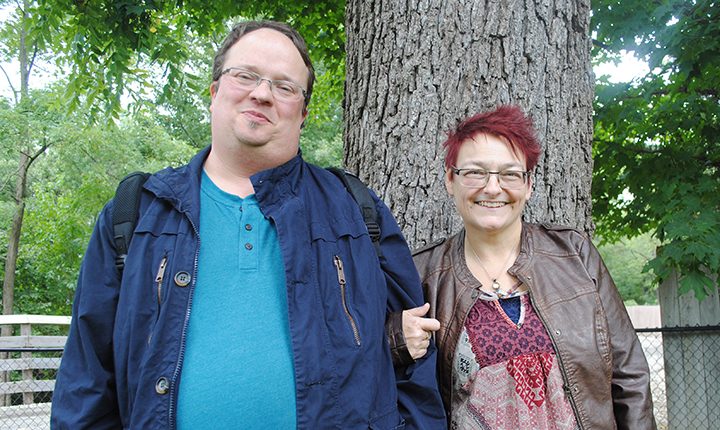 Nicole and Michael Kobrowksi by the tree in the Anti-Slavery Friends Cemetery where a Civil War soldier ghost has been spotted smoking a cigarette.. (Photo by Anna Skinner)

Westfield resident Nicole Kobrowski has had paranormal experiences since she was a child growing up in Anderson, and that sensitivity has followed her into her adult life.

She and her husband, Michael, host ghost tours all year long in Hamilton County, Indianapolis, Anderson and other area, and with Halloween fast approaching, the couple’s tours are quickly filling.

“We got into this because we wanted to have a side business from our day jobs,” Nicole said. “We love history, and we love the paranormal, so we’re like every major city has a paranormal event of some sort, so why can’t we do that here? So, we started out in Westfield because it was low risk since it was in our backyard.”

The couple launched two Westfield tours, Westfield Union Street and Westfield Underground Railroad, in 2001. The first tour consisted of two people in the pouring rain, but it didn’t take long to increase in popularity. Now, the tours are capped at 35 outside of October and 40 during the Halloween season.

Nicole admitted the Anti-Slavery Friends Cemetery is her favorite haunted Westfield area. Homeowners near the cemetery have claimed to see a white figure enter their basement and make the dogs bark. Nicole and Michael say their best guess is the ghost of Mary Pfaff, a woman who died in her late teens and is buried in the cemetery with her two infant sons.

Another ghost in the cemetery is assumed to be Samuel Pittman, a Civil War soldier who lied about his age to fight for the Union. What the Kobrowksis assume is Pittman’s ghost has been seen in Civil War attire smoking a cigarette.

Their most terrifying tour happened recently, during a bus tour in Indianapolis, on a bridge near the Indiana State Fairgrounds. Nicole could sense a bad feeling and felt sick, later learning that a few other of the tour attendees felt the same dizzying sensation.

“I was having some feelings of foreboding, and I never get that,” Nicole said. “I even mentioned it to a lady, and I usually don’t say something, but there was a bad vibe. I started telling stories, and I started feeling a malevolent feeling. I’m not doing this for effect. I don’t want people to think I try to enhance it by theater, but somebody had got something attached to them, and it’s bad.”

Shortly later, an attendee passed out from the same dizzying sensation Nicole said she was experiencing. The tour happened last month.

But despite giving tours, the Kobrowskis also immerse themselves in Westfield’s haunted history. They are part of the Anti-Slavery Friends Cemetery clean-up effort and generally clean the cemetery four times each year by cleaning stones, fixing broken stones and more.

“My mom took me out cemetery walking a lot, and there is a beauty to them, and they are living history, and one day, these stones will turn to dust again and won’t be there,” Nicole said. “We are just trying to prolong the life. We walk the walk and talk the talk. We are out there cleaning the stones and trying to give their burial spots dignity instead of broken stones and overgrown brush.”

The next Westfield tour is the underground railroad tour at 7 p.m. Oct. 21. Tickets are $13 to $18, and a detailed meeting location is sent once tickets are purchased.  For more, visit unseenpress.com. 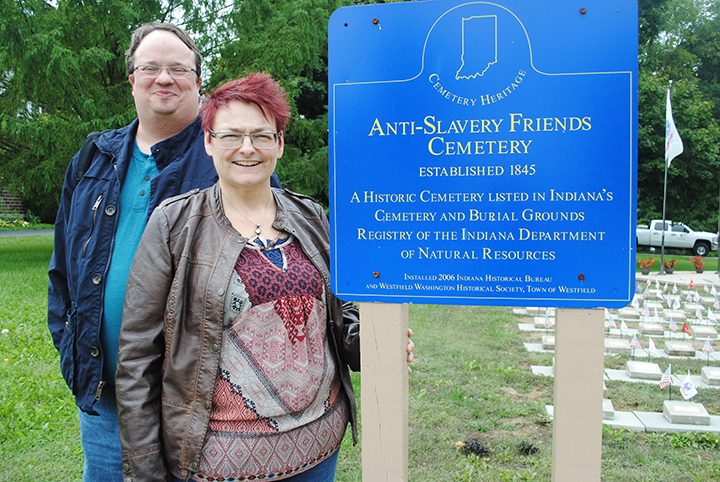 Nicole and Michael Kobrowksi at the entrance to the Anti-Slavery Friends Cemetery. Nicole said the cemetery is her favorite ghost tour. (Photos by Anna Skinner)