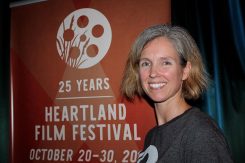 Laura Goodenow’s first feature film as a producer is definitely making waves on the film-festival circuit.

The 1995 Carmel High School graduate, who lives in Broad Ripple, produced “Year By The Sea,” which has won four audience choice awards.

The film is based on Joan Anderson’s best-selling memoir. When her husband gets a new job and has to move, she decided to live on her own in Cape Cod for one year to get better sense of herself. The piece started the film-festival circuit in April and will be shown four times at the Heartland Film Festival in Indianapolis this month.

“Our tag line is, ‘It’s never too late to claim your life,’” said Goodenow, whose film company is Real Women Make Waves. “I believe that’s true, and we hope our audience takes away the feeling that no matter what age they are or where they are in life, there is always an opportunity to step away and redefine who you are; find joy and happiness and move forward.”

Goodenow said starting with a feature film was really jumping in cold.

“A lot of people will do a short film before they tackle a feature film,” said Goodenow, who makes a brief appearance in the film.

“He has a background in Hollywood as film composer,” Goodenow said. “Of the many projects we’ve worked on, this is the one that took hold. We had a stage reading at Cape Cod in 2014 and women would drive as far away as Michigan to hear the script read because Joan’s books have changed their lives and given them newfound freedom. We realized there was an audience for the film. We had a Kickstarter campaign in 2014, raised a little seed money to show our investors there was an audience. Then we got our funding.”