You are at:Home»Current in Zionsville»Legislative panel shares 2017 plans at Business Expo 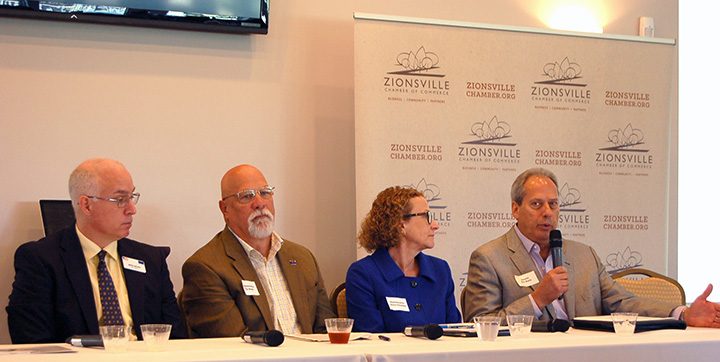 A panel of four legislators recently spoke before Zionsville business owners and community leaders at the annual Legislative Lunch and Business Expo presented by the Zionsville  Chamber of Commerce.

U.S. Rep. Susan Brooks preceded the panel discussion by offering an overview of her perspective on state and national government going into 2017. She believes national security will be a focus next year as local security “are the eyes and ears” for homeland security.

“We are the best state in the country, I think, to do business,” she said recognizing that jobs are moving overseas but that training skilled workers locally is important.

The school funding formula was also a hot topic with the impact that it has on Zionsville and other school districts. Delph said that he represents areas that include Carmel and Zionsville along with some Indianapolis Public Schools and sees the range of schools impacted.

“Trying to find the right balance in the school funding formula I think will probably be a challenge for us as it is every time we go through the budget,” he said.

“Education is a major issue we always deal with,” Schaibley said. She also said that finding long term solutions for roads is a goal for next year’s budget.

They agreed that Indiana’s reputation is a weakness. Schaibley said that the mentality about Indiana changes when people being recruited by local businesses visit the state.

“Once they get people here, they see what we have to offer,” she said. “We have a reputation that is not true to what we really are, and we need to somehow get better word out about our communities.”