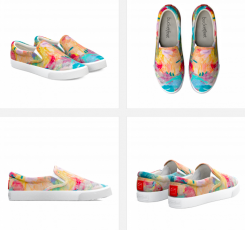 Shoes sold through Bucketfeet feature a painting by Brooks Blackmore, who died at age 6 after fighting brain cancer. (Submitted photo)

Tracey Blackmore is determined to make sure she honors the memory of her 6-year-old son Brooks, who died in May after fighting brain cancer.

Brooks’ story captured the hearts of people in Carmel, leading to numerous fundraisers, events and a popular Facebook blog.

Now, the Carmel mother has announced an opportunity to raise money to fight childhood cancer in her son’s honor.

Tracey reached out to Bucketfeet, a footwear company that creates shoes designed by independent artists, and now a limited line of shoes are being released based on a painting done by Brooks before he died.

“As you may know, during his battle with cancer, Brooks couldn’t do many of the physical activities he was used to and instead found a new love for painting,” said Jenny Chao, who is helping promote the campaign. “Before his passing, Brooks painted a canvas for his mother on her birthday and called it ‘Sweet Pea in Heaven,’ named in tribute to his family’s late bulldog. This painting has helped provide the Blackmore family with comfort during this difficult time.”

Tracey said the shoes are being pre-sold for a limited time for $75 to benefit St. Baldrick’s Foundation, a childhood cancer charity. For every pair of the brightly colored slip-ons sold, $20 will be donated to the foundation.

“The flourish of colors and free-flowing technique captures the artist’s youthful creativity and passion for painting,” according to Bucketfeet’s Web site.

Blackmore said she’s appreciative of the company’s efforts to remember her son.

“It all goes to research, but it means so much more than just that to us,” she said.

See and purchase the shoes online at bucketfeet.com/sweet-pea-up-in-heaven.