You are at:Home»Current in Zionsville»Councils approve tax increase to support public safety in Boone County 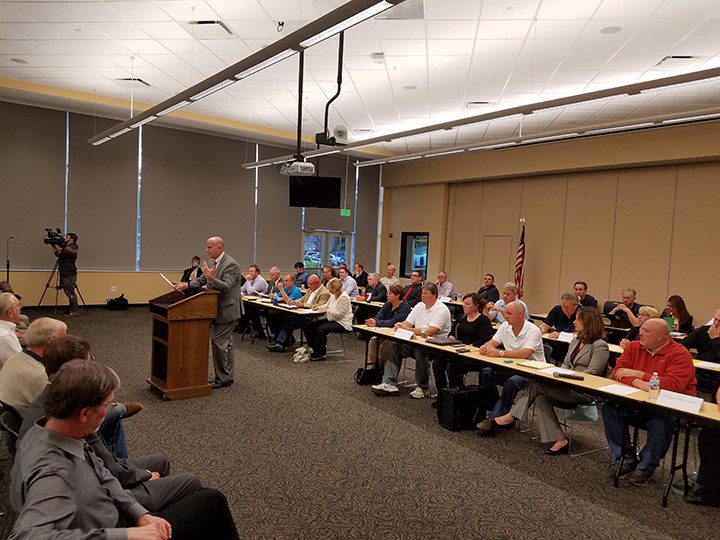 Boone County attorney Bob Clutter addresses the crowd as councilors from across Boone County sit behind him and prepare to open a public hearing. (Photo by Ann Marie Shambaugh)

With the Boone County Council approving the .5 percent rate increase in September, only the Lebanon or Zionsville council needed to approve it for it to take effect. Lebanon voted 4-3 in support, making the tax increase official with three councils still to vote.

After Lebanon’s vote, the Whitestown and Zionsville town councils voted unanimously to approve the tax increase, but Zionsville Town Council President Susana Suarez said the town plans to file an amendment in early 2017 that would sunset the tax in seven to 10 years.

“Anytime you increase taxes, there should be some level of accountability for the taxpayers to know that you’re doing this in such a serious way that you’re willing to revisit and reassess whether those funds are still needed,” Suarez said after the meeting.

If Zionsville approves the amendment, either the Boone County Council or Lebanon City Council would also need to approve it for it to take effect.

The town councils of Advance and Jamestown voted unanimously in support of the tax increase. Thorntown councilors voted 2-2, with the clerk-treasurer voting in support to break the tie. The Town of Ulen did not send representatives to the meeting.

Boone County Sheriff Mike Nielsen spearheaded the effort to adopt the tax increase. He spent months meeting with county officials and residents to explain why he believes it is the only way to address public safety staffing shortfalls throughout the county and meet other needs.

He said advocating for the tax was “the most important personal and professional journey that I have ever and will ever take in my career.” Those efforts will lead to an expected $4.5 million for Boone County next year.

Before the vote, dozens of Boone County residents shared their thoughts on the tax increase during a public hearing.

Joyce Douglas of Lebanon was among many residents who urged the councils to reconvene at a later date to consider a lesser tax increase.

Among the supporters of the tax were several members of police and fire departments in the county, including Advance resident Trevor Davids, who works in the county jail. With current staffing levels, only two officers are in the jail at one time.

“I live in fear at times in the facility I work in, because I only have one person helping me at times,” he said. “When there’s three of us, it feels like we just hit the lottery.”

Nielsen’s five-year strategic plan for implementing the LIT includes hiring eight additional merit deputies, 10 corrections officers, three courthouse deputies and one communications officer for the BCSO. He said he expects to spend 2017 filling those roles, with the public seeing a significant difference in service in 2018.