You are at:Home»Current in Zionsville»Pumpkins for a Purpose to raise funds for various nonprofits

Every October, Akard True Value Hardware in Zionsville holds the Pumpkins for a Purpose fundraiser. The tradition began in 2013. 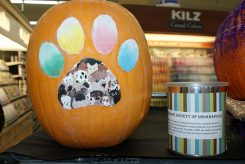 A pumpkin in support of the Humane Society of Indianapolis at the 2015 event. (Submitted photo)

“The idea came around when people were talking about painting pumpkins pink to raise awareness for breast cancer,” said Leigh Ann Akard, third generation family business partner at Akard True Value. “I got to thinking about it and thought it was such a cute idea. But when I really got to thinking about it I realized there are so many different organizations, causes and wonderful things that are looking for support and donations, and even more importantly ways to raise awareness.”

Participants can paint a pumpkin for a cause they support and bring it to Akard True Value Hardware by Oct. 14.  along with a 4 x 6 printed information card naming the pumpkin and information about the beneficiary.

“It could be something as simple as a Halloween pumpkin or something relating to their cause. Each day during the contest, we’ll promote one pumpkin on our social media sites,” Akard said. “At the end, all the pumpkins will be on display. People can vote on which one they like the best. It’s a penny a vote. Each organization keeps the money given to vote for their pumpkin.”

The group with the most votes will receive an additional $100 donation.

The pumpkins will be on display for public voting Oct. 17-31 at Akard True Value Hardware, 25 Boone Village in Zionsville. They will also be featured at the Boone Village Halloween party Oct. 27.

“Our hope in doing this is to help push out the word and educate,” Akard said.