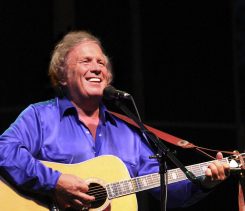 Don McLean will perform at 8 p.m. Oct. 14 at The Warehouse. (Submitted photo)

For Don McLean, it seems life has been one long tour since 1968.

“A lot of artists stay home for a few years and then do a big tour,” McLean said. “I always ramble around. It must be (a passion) because I have to go through more and more stuff at the airport. My children are grown. I’m divorced now. Thank goodness, I still have a career to go to — singing and traveling.”

McLean’s travels will land him and his five-piece band in Carmel for an 8 p.m. concert Oct. 14 at The Warehouse, 254 1st Ave.

McLean, 71, has been working on a yet-to-be released album, “Botanical Gardens.”

“I’ll be doing some songs from that but not too many,” McLean said. “Most of it will be songs people know and songs from the albums they have.”

In 1971, McLean burst on the music scene with his “American Pie” album, which included the title track and “Vincent.”

The 8 1/2-minute “American Pie” was chosen as the fifth greatest song of the 20th century by the National Endowment of the Arts.

“The record company signed me immediately and edited the song down to three minutes,  and it was all chorus and a couple of verses,” McLean said. “That broke through quickly into the top 10. Then people bought the album and heard the whole song, called up the radio stations and say we want to hear the whole song. So they would play the track off of the album. Then they put out a 45 (rpm record) with ‘American Pie Part 1’ on one side and ‘Part II’ on the other side. Every time you went to the jukebox you got paid twice. Every time it got played on the air, you got paid twice. It was like having two hits at once.”

Although it has been one of the most analyzed songs in history, McLean has avoided breaking down the lyrics over the years.

“I tell people it began with the Buddy Holly plane crash (in 1959),” McLean said of the day the music died.

McLean said “American Pie” helps new fans gain appreciation for Holly, who ws 22 when he died along with Richie Valens and The Big Bopper (J.P. Richardson).

“It helped make (Holly) the legend he deserved to be,” McLean said.

“It was a challenge, and I had to learn to sing better when I had that hit record because I had to sing it every night,” McLean said. “It’s a beautiful song. The audience loves it, and it’s a very powerful moment in the show.”