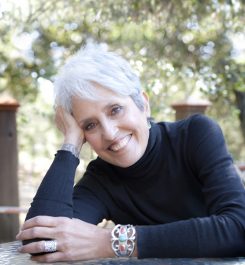 Joan Baez began to not enjoy the sound of her own voice, a voice that has entertained millions for 50-plus years.

So, she said she went to a voice coach approximately five years ago.

“I was about to throw in the towel,” Baez said. “I didn’t have the tools to deal with the changes. I do now, so it’s a question of work.”

She said she sees the vocal coach every couple of months and before she goes on tour and does voice exercises.

“The fact is, it will never ever be easy again (to sing),” she said. “So that’s something that comes to my mind at 75. How much do I want to struggle to make it sound wonderful to have people enjoy it and have me enjoy it? I don’t know how long that will go on.”

“I’ll do some songs I haven’t done in a long while,” said Baez, who will perform some favorites as well.

The legendary folk singer has long been a human rights activist, walking with Martin Luther King Jr. during the Civil Rights Movement and protesting the Vietnam War.

This concert tour is to the benefit The Innocence Project, which seeks to exonerate those wrongly convicted through DNA evidence and improve the system to prevent further injustice. Members of the Innocence Network will also accompany her during the 20-city tour.

“I try to find something relevant to put some energy into, and this one is a no-brainer,” Baez said. “It’s wrapped up in non-violence, and it’s dealing with racial injustice and racial disparity. They’re well organized, and they’ve had a lot of success.”

“For me it helped with the acceptance of being 75,” said Baez, who turned 75 Jan. 9. “We all know that we get betrayed looking in the mirror, but I do not feel 75 years old. If I pay attention to Buddhist teaching and some of the people I act out with and mediate, I have to start thinking about death as gracefully and open-eyed as possible.”

“I think next year I’ll partly find out what it feels like (not to tour) because I’ve been doing this over half a century,” Baez said. “I think a serious winding down is in order.”

Baez’s son, Gabriel Harris, has toured with her for five years, playing percussion.

“I’m lucky, how many moms get to hang out with their sons after they marry?” said Baez, who added that the time together has been invaluable.