You are at:Home»Night & Day»Entertainment News»Jim Messina to play two shows at The Warehouse in Carmel

Jim Messina has a long music career as a performer, engineer and producer. 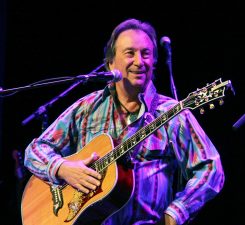 Messina, 68, is especially enjoying traveling with his band.

‘’We’ve all chosen to stay away from the drugs, stay away from the alcohol and play music,” Messina said. “It’s great to have mature people, at least somewhat mature as a musician can be. I mean, they may be crazy but they’re not stupid.

Messina started as an engineer and an uncredited producer with Buffalo Springfield. He played bass and produced the band’s final album. After Buffalo Springfield broke up, Messina became a founding member of Poco in 1968, but left after two years. He returned to being a producer and his first project was Kenny Loggins’ debut album. That led to Messina joining Loggins on tour and a successful run for Loggins & Messina.

Messina will perform songs from the live album he recently released, which also includes songs from his solo career. Messina released “In the Groove” on vinyl and on a USB flash drive, the size of a credit card. Messina said he believes flash drive release will be the wave of the future.

“The purchaser can plug it into their car and it will play, or they can plug into their computer and it automatically goes to their iTunes,” Messina said.

The all-access pass includes lyrics to all the songs, a video of the encore, photos and art work. The pass comes with a lanyard, which buyers can wear as a priority access pass at meet and greets.

“It’s kind of like a backstage pass,” Messina said.

Messina will draw from a wide variety of genres on the tour.

“I’m going through a lot of different musical styles, all of which I’ve gone through in my life and in my career,” Messina said.  “After Poco, I got so burnt at that idea that they wouldn’t play our music because it was too rock for country and too country for rock. It was such a turn-off. I swore after that I was not going to do one particular genre again.”