Gurinder Singh Khalsa is convinced the time was right to start a SikhsPac, a nonpartisan political action committee. 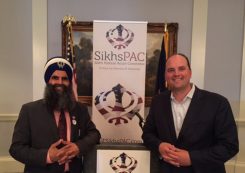 “We’ve been planning to start this for more than a year because we wanted to launch at the right time just before the elections,” said Khalsa, who is the SikhsPac chairman.

Khalsa, a Fishers resident, said the group is focusing on Indiana candidates.

The SikhsPac has raised approximately $500,000 in pledges so far.  Selfless service to the community and nation are core values of the Sikh religion. There are an estimated one million Sikhs in the United States. Khalsa was born in India in 1973 and moved to the U.S. in 1996.

“The major candidates for those three offices are supporting our agenda,” Khalsa said. “Our agenda is very simple; we want Sikh awareness through education. We want to be part of the curriculum.”

Khalsa said SikhsPac is supporting the candidates from both sides in those three races.

“Right now, in school curriculums, high schools in Indiana are teaching about Christianity, Islam and Eastern religions, but not teaching about the history and culture of Sikhs,” Khalsa said. “Because of our different appearance and the clothes we wear, 55 percent of the students in our schools are getting bullied because of our appearance.”

Male Sikhs wear turbans and have beards.  Khalsa said most of the Sikhs in Indiana live in the Indianapolis area, and in Fishers, Carmel, Greenwood and Plainfield. Khalsa said the gurdwara, the place of worship, is in Fishers.

Khalsa said the group is not supporting any congressional candidates or the two U.S. Senate candidates but might consider it. For more, visit sikhspac.com.