You are at:Home»Current in Zionsville»Carrying the torch: Zionsville prepares to celebrate state’s bicentennial 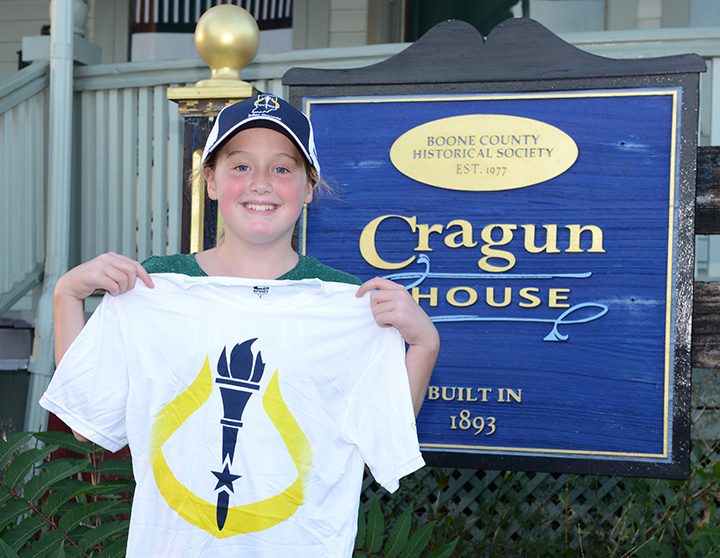 Fourth grader Audrey Mast of Zionsville displays her official torchbearer T-shirt. She is one of 11 Zionsville residents selected to carry the bicentennial torch through town. (Photos by Theresa Skutt)

For more than five weeks it’s traveled by farm equipment, roller coaster, horse and buggy, Studebaker, boat and race car. And when the Indiana Bicentennial torch enters Zionsville Oct. 13, it will briefly travel in a 1939 Buick before the trek to Lincoln Park just days before the final stop at the Indiana Statehouse.

As part of the state’s bicentennial celebration, a torch modeled after the one on the state flag will make its way through all 92 counties. It is being carried by thousands of relay participants. The torch will enter Boone County earlier that day, then travel through downtown Lebanon before heading east on Oak Street to Lincoln Park. After a brief stop in the park it will continue along First Street to Sycamore Street, heading east to Michigan Road where it will be passed to Hamilton County at Zionsville Presbyterian Church.

Festivities will begin at noon with cake, ice cream and music as part of a free event in Lincoln Park. The torch is expected to arrive around 1:45 p.m.

“We can’t predict exactly when it will arrive,” said Rhonda Crawshaw, chair of Zionsville’s bicentennial committee and a member of the Boone County bicentennial committee. Thanks to a GPS device and camera built into it, the torch’s progress can be tracked in real time through a mobile app.

When the torch leaves Boone County, the celebration will shift to the SullivanMunce Cultural Center for an evening tribute to citizens of the town with Cause for Celebration, celebrating the release of a book of Zionsville narratives that was designated an official legacy project by the Indiana Bicentennial commission.

Eleven Zionsville residents were nominated in the spring to carry the torch. All 11 were selected.

“We really felt that everyone made a noteworthy contribution to the community,”  Crawshaw said. “We wanted as many people to participate as possible.”

At the park, Abraham Lincoln impersonator Danny Russel will informally share the former president’s history. The Zionsville Community High School Wind Ensemble Band will perform, and town council members — past and present — will be part of the afternoon’s festivities.

“The torch run was designed to unite Indiana as one,” Crawshaw said. “The symbolism is to ignite the flame and pass it to the next generation. It symbolizes the past, present and future.”

The ticketed event at the SullivanMunce from 6 to 8 p.m. will celebrate Zionsville’s history with the release of “Tell Us More Zionsville, Indiana Narratives,” a compilation of 15 interviews with Zionsville residents. Food, beer, wine and music by Willoughby Sprig – all former students of Zionsville schools – will cap the evening.

Janet Maloney, who created a business to collect personal oral histories, conducted the interviews with residents and edited the book. Most of the 15 interviewees are expected to attend the event, although one narrator, Oliver Warner, died last year.

“I think that will make the book special not only for the community, but also for their families,” said Diane Jackson, the event’s co-chair. “You have their words and their thoughts.”

“Because it’s a community history project, I had selected about a dozen community-related subjects,” Maloney said. “I asked (interviewees) what they would feel most comfortable talking about. It’s laced with their personal experiences related to topics, which brings the charm and humanity to the whole effort. The stories they have to share about Zionsville, they were so charming, and you just lose yourself in hearing them tell these stories.”

The book is patterned after a previous book of oral histories, “Zionsville, the First One Hundred Years,” written by Joan Lyons and created for Zionsville’s sesquicentennial.

“There was an effort to connect it,” Maloney said. “That’s why it’s called ‘Tell Us More.’”

Jackson said the idea “mushroomed” two years ago when the museum was in the process of restoring the tapes from the first oral history book.

“It’s been a lot of work and energy and effort on the part of a lot of people to make this happen,” Maloney said.

Interview excerpts will be aired on Zionsville’s radio station WITT 91.9 throughout October.

The book jacket, based on photos representing the town found in the museum archives, was designed by the museum’s Executive Director Cynthia Young. Original artwork of the book jacket will be auctioned with other community-related items, including those donated by the Indiana Fever and ZCHS graduate and Boston Celtics Head Coach Brad Stevens.

The book will be available at the SullivanMunce for $30 with all proceeds going to the museum. Tickets to the event include a copy of the book and are available on the museum’s website, sullivanmunce.org. 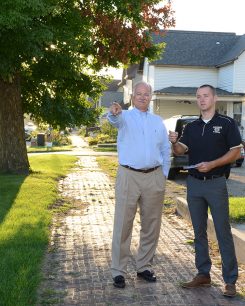 Perry Hammock helps Ben Boyer figure out his route for the relay. (Photo by Theresa Skutt)