You are at:Home»Current in Carmel»Carmel Community»Carmel Peace Corps volunteer returns after 27 months in Ecuador

Julia Schiffman of Carmel recently returned from 27 months with the Peace Corps in Manabi, a province of Ecuador. After three months of training, she began her service in August 2014, partnered with World Vision, a nonprofit Christian organization. 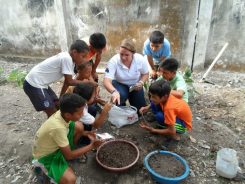 Schiffman and volunteers campaigned at 26 elementary schools, providing kits and workshops for students to learn about the importance of hand washing and brushing teeth.

Raising awareness of sex education and prevention of HIV/AIDS was another focus of Schiffman’s projects. A youth group was formed for teens, and students participated in a three-day camp where they learned about HIV/AIDS, how to prevent it and how to help those affected.

In addition to these projects, Schiffman was involved in Girls Leading Our World, an organization encouraging women empowerment and health. Her final project served mothers, providing them with nutrition counseling and skills.

On April 16, Manabi was hit by a major earthquake. Schiffman was living in the southern area of Manabi and was affected, but not to the extent of those living in the northern part. Food and clothing drives were held for victims.

“Seeing and knowing all these people that got affected by such a tragic event made me want to stay and to continue out my service,” Schiffman said.

Volunteers in Ecuador were assigned host families. One of their many goals was to integrate into the community.

“I plan on going back, because I made a life there,” Schiffman said. “Peace Corps kind of helps you re-evaluate the values that are in your life, especially the important ones like family, respect, trust.”

Schiffman returned to the U.S. in August and  wants to encourage other students from Indiana University to join the Peace Corps.