You are at:Home»Night & Day»Amy’s top film picks for the Heartland Film Festival 2016

The 25th Heartland Film Festival Anniversary begins Oct. 20 with the opening-night film, “The Book of Love.”

The red-carpet event will include actors Jessica Biel and Richard Robichaux, along with producer Melissa Purple. On Oct. 21, the excitement continues with the 25th Anniversary Celebration, where VIP guests will be greeted on the red carpet while having the opportunity to mingle with filmmakers and celebrities (including actor Brain Dennehy, who will be honored with Heartland Film’s Pioneering Spirit Lifetime Achievement Award.

The prestigious,10-day festival will include films from all over the world with special events through out the week, including several premieres. The Heartland Film Festival Awards Party is Oct. 29, and on Oct. 30 the festival will conclude with my personal favorite event, The Filmmakers Brunch at the Sheraton Indianapolis at Keystone Crossing. That night will also end with the closing night screening of “Josephine.” Director Rory Feek and additional cast and crew are scheduled to attend.

AMC Castleton Square 14 and AMC Showplace Traders Point 12 will screen films with the Premiere Pavilion at AMC Castleton set for the parties. Come join Where’s Amy on the red carpet, and experience films that engage, educate, inspire and challenge audiences of all ages. Not sure what to see? Here are four films you should not miss, and for a twist, these picks all have Indiana ties. Where’s Amy can’t wait to see you at the movies!

“New Life”  (U.S. premiere) – Ben met Ava at age 7 standing in his driveway. As the two journey together through the seasons of life, a tragedy occurs that leaves their entire future in jeopardy. Note: Ninety-five percent of this film was shot in Indiana. Director/writer Drew Waters, Actress Erin Bethea and cast/crew will be attending. Be prepared to laugh, cry and have a new outlook on family and life. 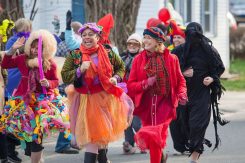 “Year by the Sea”  (Official selection) – Hoping to reclaim who she was before becoming a wife and mother, an empty nester retreats to Cape Cod where she embarks upon a quest to set herself free. Carmel native and producer Laura Goodenow, writer/director/composer Alexander Janko and actress Karen Allen will be attending.

“Reengineering Sam” (U.S. premiere) – Sam Schmidt lived out his boyhood dream as an IndyCar racer, winning races and earning the title of IndyCar “Rookie of the Year” along the way. That dream came to an abrupt end when Sam crashed into a wall at 200 miles per hour, leaving him quadriplegic. Sam’s accident rendered him physically helpless until a dedicated group of some of the brightest minds today stepped up to build him a car that he could drive using only his head. Reengineering Sam chronicles Sam Schmidt’s inspirational road back to the Indianapolis Motor Speedway and shows the promise of freedom and mobility for almost anyone confined to a wheelchair. Director Brian Malone and Sam Schmidt are scheduled to attend.

“Vince Giordano – There’s a Future in the Past” (Official selection) – Bandleader Vince Giordano keeps the Jazz Age alive with his 11-member band The Nighthawks, vintage, musical instruments, and a collection of more that 60,000 original arrangements from the 1920s and ’30s.Vince Giordano and director/writer/producer Amber Edwards will be attending. Note: The film’s promotional partner is The Great American Songbook Foundation.