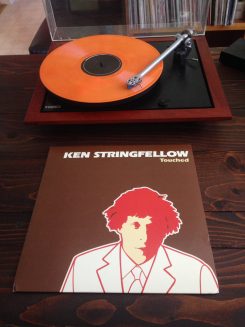 The orange-cream vinyl record is a special edition from Azucar Records. (Submitted photo)

Jeremy Zucker couldn’t understand why one of his favorite albums, “Touched,” by Ken Stringfellow, hadn’t been pressed on vinyl. So, he suggested to the musician that he could find a way to have it re-released.

“He said let’s do it,” said Zucker, a Zionsville resident whose business is based at zWORKS. “So then I had to figure it out.”

Music-lover Zucker had met artists such as Stringfellow through his website, Indy Rock Live, which started years earlier as a way to see concerts for free.

Learning about the record-making process through local contacts, Zucker created his vinyl-only boutique record label, Azucar Records and had 500 copies of “Touched” manufactured.

“I thought, ‘Why not give this a shot?’” he said. “Now it exists. I wanted to make it exist. This means something to me.”

To celebrate its sole availability as a limited edition, he chose orange vinyl for the album. Copies are sold at Luna Music in Indianapolis and through online orders that Zucker personally fulfills.

The album was initially released on Sept. 11, 2001, which Zucker said was a source of comfort for many people. The release of the vinyl version coincided with the 15th anniversary of the album’s release and sales have been brisk during the first few weeks, within the U.S. and internationally.

Zucker noted there is a gap in vinyl availability for music produced between the ’90s and ’00s.

“I’m taking those beloved albums from the last 20 years and putting it in this format,” he said.

He said hopes this venture will set an example for his three children.

“If you have an idea to do something, why not give it a shot?” he said.

Ideally, he said he would like to produce a few albums each year, mostly as reissued recordings, but hasn’t ruled out new material. To make the legalities easier, the artists must own their music and possess the audio files.