You are at:Home»Current in Carmel»Carmel Community»Carmel students organize walk to raise awareness of Lewy Body Dementia 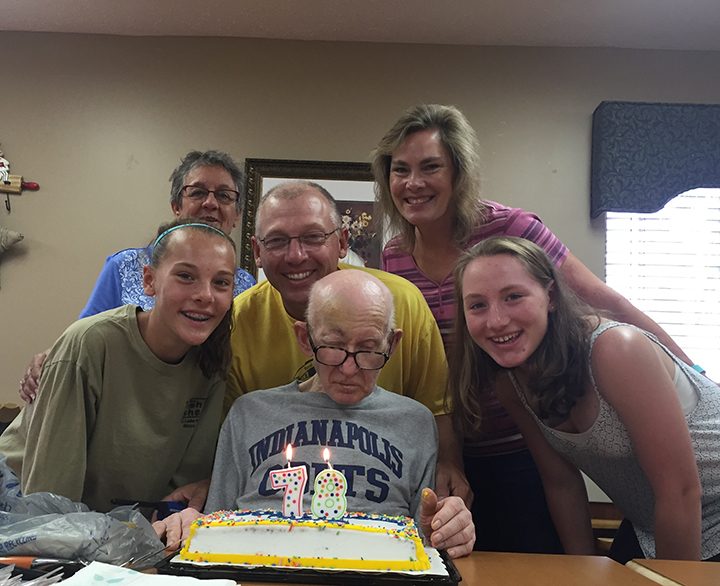 Lewy Body Dementia has recently gained national attention with the death of actor Robin Williams, whose brain showed signs of the disease. But for Carmel resident Kevin Seibert and his family, LBD is personal.

Seibert’s father, Gary Edward Seibert, was diagnosed with LBD after a lengthy struggle to figure out what was wrong.

“We got him into a geriatrician, an aging specialist, and that was the first time someone actually said to him they thought he had Alzheimer’s. The doctors thought he had hydrocephaly, water on the brain,” Kevin Seibert said. “He progressively got worse in the hospital. After four or five days, we were finally able to get him into a rehab facility. At that point they tried to give him a medication to calm down the hallucinations he was having. It caused him to drop to a comatose state where he couldn’t speak or walk.”

Gary’s reaction to the drug was the tipping point in his diagnosis being LBD rather than Alzheimer’s. LBD is a progressive brain disorder caused when abnormal protein deposits build up in areas of the brain that control behavior, cognition and movement, according to the Lewy Body Dementia Association.

For Kevin’s daughters, Sarah and Laurie, students at Carmel High School and Creekside Middle School, respectively, the diagnosis led to some important questions.

“They were seeing all these things about Alzheimer’s awareness and they were asking me why there weren’t any awareness events about LBD,” Kevin Seibert said. “I was trying to explain to them that it’s severally under-diagnosed. The estimation is about 1.2 million people have it, but most of them are classified as having Alzheimer’s.”

His daughters decided they wanted to get involved to help spread awareness of the disease. After searching for walks to attend, they found only one in Atlanta. The girls decided to organize a walk in Carmel. The Oct. 22 event will start and end at Danny Boy Beer Works and is $25 to participate.

“All the proceeds will go to the Lewy Body Dementia Association. Our initial goal was to raise $1,000. We thought if these two girls can raise it, we’ll be ecstatic. We’ve already hit the $1,000 mark. We’re hoping to hit 100 participants,” Kevin Seibert said.

For more, or to register, visit stoplewy.com.