You are at:Home»Current in Zionsville»Zionsville mom seeks kidney donor

Every time Sandy Rocco goes to her doctor, the Zionsville resident faces the same question. 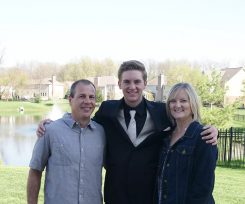 Rocco, 52, has been on the kidney transplant list through IU Health since March. Her husband, Pete Rocco, is not a suitable match. Since her condition is hereditary, her immediate family members are not eligible.

“The kidney disease I have is an inherited disease (polycystic kidney), so it’s progressive,” Rocco said. “I’ve been fine up until October, and that’s when my kidney function started to fall, and that’s when they started doing testing and decided I needed to get a transplant.”

Rocco is trying to avoid having to undergo dialysis. She goes for blood tests every month.

“Every month my kidney function falls lower and lower,” Rocco said. “That’s why we’re hoping to find a living donor before I have to go on dialysis, because that will give me the best overall result and life expectancy. Once you go on dialysis, it’s three days a week and you are there six hours a day.”

That would make it hard for her to travel for work and to watch her son, Mike, a Zionsville Community High School senior, play baseball on the travel team. Mike is the couple’s only child together. Pete has three other children and Sandy has two others.

Rocco said there are more than 100,000 people nationwide on the kidney waiting list. At IU Health, the waiting list is 900. Rocco said the doctors say the wait is typically three to five years.

“Anyone can be a donor. It doesn’t have to be the same blood type that I am,” Rocco said. “There’s been a lot of advances with anti-rejection medicine.”

Rocco said her brother and sisters have the same disease, but they are not having any issues yet.

The family has started a Facebook page called “A Kidney for Sandy.” The first step for potential donors to take is to call IU Health at 317-944-4370 for an interview to determine eligibility. Pete said they have had some friends say they have called but were not eligible because of blood pressure, diabetes or something else.

“There are a lot of people that get ruled out immediately,” Pete said.

Pete has entered the paired donor program, where he might donate his kidney to another patient in exchange for the other patient finding a match for his wife.