You are at:Home»Current in Westfield»Westfield shares its future goals for the Grand Park Events Center 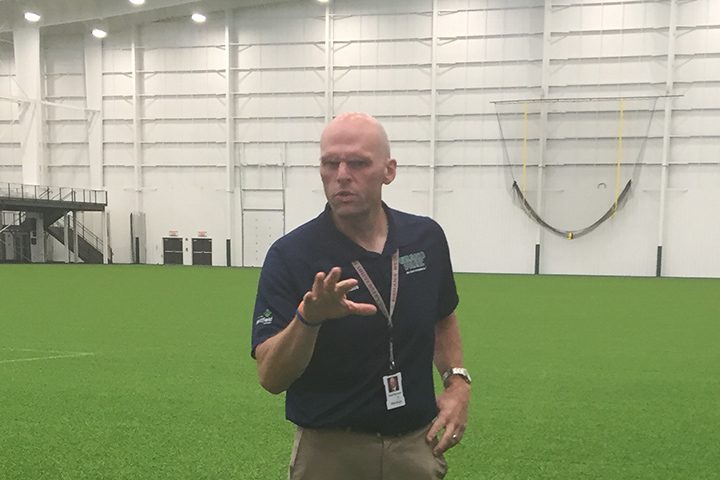 Westfield saw nearly a million visitors come to Grand Park Sports Complex in 2015. For 2016 and beyond, city leaders expect even better numbers, partly due to the new $20-million-plus indoor facility, the Grand Park Events Center, which opened in July.

The new private-public partnership has space for a variety of youth sports and features three full-sized soccer fields. In September, it was announced that Max Lax, based in Westfield, will become the official indoor lacrosse provider for the facility, and Grand Park Events Center will be the home for the lacrosse league with fall and winter programs. Force Barbell will run the youth training area and workout facility at the events center. It is already the corporate headquarters for the Indiana Soccer Association.

The space was originally planned as a 60,000-square-foot indoor facility but now covers 370,000 square feet. Holladay Properties built the Events Center and leased it to the City of Westfield for the next 25 years. Subleased tenants will help the city pay annual rent, which starts at $1.97 million and escalates every five years.

The Events Center is still filling up its available space for retail and office tenants, but Burtron said Adidas will have a partnership and a presence. He’s in talks with an organization that does “American Ninja Warrior”-type activities for children.

Indoor soccer and lacrosse are the most popular uses for the indoor fields, but Burtron said they are pretty flexible.

Before the facility officially opened, it was the location for a Donald Trump presidential campaign rally that drew more than 8,000 visitors. Corporate events are also a big part of the plan, Burtron said, with companies renting the space for indoor picnics, soccer events, kickball tournaments and more. Events like the Home Show could become regulars inside the facility.

“I don’t know if we’re going to be friends with the Indiana State Fairgrounds much longer because people are looking at us now,” he said.

The Events Center is also home to much of the catering operations for Jonathan Byrd’s. The company has exclusive rights for the venue, which features private rooms and luxury suites for guests. There’s an upstairs lounge called The Nest which features TVs, a full-service bar with local beers and an elevated view of the fields. Downstairs, Jonathan Byrd’s Restaurant has more of a food court feel. The restaurant has regular hours throughout the week.

Executive Chef Anthony Armstrong said his son was involved in travel soccer for years and he saw what was happening at Grand Park.

“I thought, ‘Somebody is going to do very well up here because they need some places to eat,’” he said. “And now we’re the ones providing that service for the community.”

Burtron said he knows there have been critics of the costs associated with the Events Center and Grand Park as a whole, but he said Westfield had to do something to create an industry because, “You just can’t raise enough on home taxes alone.” In total, he said the city has calculated more than $100 million in economic development due to Grand Park.

“There’s a merit to saying Rome wasn’t built in a day,” he said. “Since Grand Park has opened up, we can calculate about $70 million in additional assessed valuation.”