You are at:Home»Current in Carmel»Carmel Community»Traumatic brain injury survivor hopes to inspire at Brain Bolt 5K 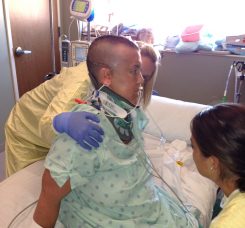 For Rebecca Overman, being the spokesperson for the second Goodman Campbell Brain and Spine 5K Brain Bolt is an opportunity to inspire traumatic brain injury survivors and bring her own journey of strength and survival full circle.

“Having another TBI survivor to speak to and hopefully connect with other survivors who are at that event can maybe inspire hope as it did with me,” Overman said.

On Aug. 1, 2013, Overman was a pediatric critical care nurse, sitting in a golf cart with four other nurses, on her way to deliver medications during the Riley’s Children Foundation’s Hematology-Oncology Camp when everything changed.

“We were driving down a steep hill, and the golf cart became unstable and eventually flipped,” Overman said. “I was ejected 20 feet and landed directly on my head. Honestly, I should not be alive. One of my friends and colleagues who was also in the accident said when she woke up I was agonal breathing, and agonal breathing is end-of-life breathing.”

Her road to recovery took her from the Neuro Critical Care Unit at Methodist Hospital, a month she cannot remember, to the Rehabilitation Hospital of Indiana. At RHI she met Andrea Vellinga, a woman receiving outpatient treatment who filled her with hope. Vellinga suffered TBI in 2011 at the Indiana State Fair when the stage she was on collapsed.

“I needed to connect with someone who was recovering well,” Overman said. “It turned my rehab completely around.”

Overman returned to work on a part-time basis eight months after suffering TBI and was full-time within the year.

“It affects so many people in the state,” Shaw said. “Not many people are aware what a simple fall on your bike can do, or you’re rollerblading, or you’re Becky (Overman) and you’re volunteering in a golf cart.”

ThinkFirst National Injury Prevention Foundation will be onsite, with therapists and researchers available to inform visitors about preventative techniques.

Having re-learned how to walk two years ago, Overman will walk the 5K Brain Bolt, which will take place at 8:30 a.m. Oct. 8 at the Carmel Gazebo at Civic Square. Sign-up for the 5K continues through the morning of the event.