You are at:Home»Current in Carmel»Carmel Cover Stories»The next step: Paralyzed in 2014, Carmel mom readies to run 2 half marathons 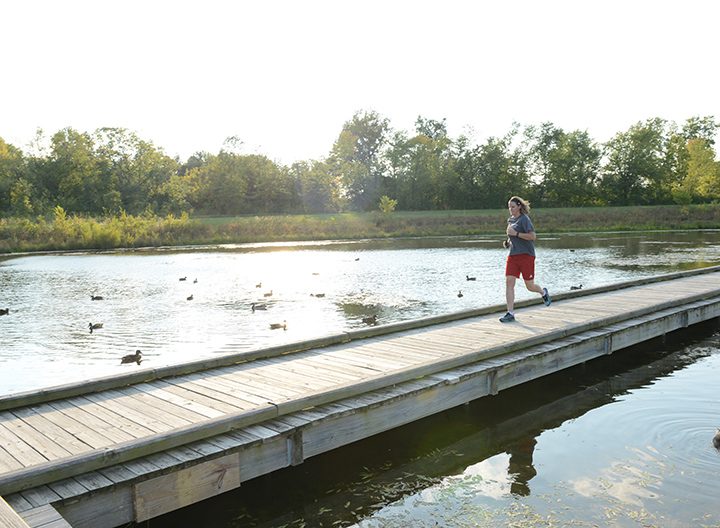 Melanie Brown runs across a bridge in West Park. She is training for two half marathons this fall after recovering from an illness that left her paralyzed in 2014. (Photo by Theresa Skutt)

Most of the one-in-a-million people who are diagnosed with transverse myelitis wouldn’t think of themselves as lucky, but Melanie Brown considers herself just that.

The disease is an inflammation of the spinal cord that can lead to pain, paralysis and loss of bladder control – all experienced by Brown – and many other symptoms. Doctors initially had trouble diagnosing the Carmel resident, and they suspected a tumor or infarction as other possibilities.

Relieved to not be facing those maladies, Brown, 45, battled the disease that attempted to steal her mobility and dignity. Once bed-bound, she’s defying the odds and is training to run two half marathons this fall, the first since her diagnosis.

“I consider myself fortunate,” she said. “About a third of the people who get (transverse myelitis) have no recovery.” 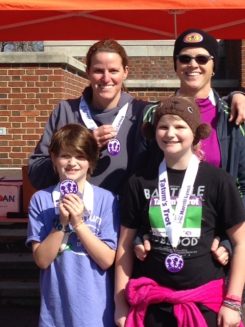 Melanie Brown, back left, her partner, Amy Harbin, and her daughters, Tatum Brown and Ahni Brown Harbin, display their medals after the 2015 Tatum’s Trot 5K. “Everyone else in my family hates to run, so it was really cool that they did this,” Melanie Brown said. (Submitted photos)

Brown was working as a pharmacist at Community East Hospital in mid-2014 when she suspected she might have a case of shingles. She began treatment but about a week later she started having a “weird pain” and numbness in her legs, a sensation she tried to walk off on a treadmill.

“I ended up falling, because my legs just gave out,” she said.

A trip to the emergency room found nothing, and Brown’s condition continued to worsen in the coming days, leaving her paralyzed from the waist down. She said she was petrified.

Eventually, doctors discovered the culprit: a lesion on her spine.

“I got shingles, and then my immune system just went crazy and saw my spine as foreign and attacked it,” she said, adding that many types of common infections can cause this to happen in rare cases.

Once she had a diagnosis, Brown, a mother of two, decided she would do everything she could to regain her ability to walk, and more. With recovery from transverse myelitis unpredictable and often unforgiving, the lifelong runner despaired at times during her six-week hospital stay.

“I would just wake up in a panic and in a sweat thinking, ‘I’m never going to do this again,’” she said.

But as time went on, her resilient spirit took hold.

“I was horrified about not being able to walk and not being able to run, but at the same time I felt a peace that it was going to be OK,” she said. “I don’t know how to explain that. I never lost hope. A lot of my friends would come to the hospital and see me and start crying. I was actually comforting them.”

Brown got to work, completing three hours of therapy a day at a rehabilitation hospital, relearning to do everything from moving her legs to folding laundry. When she was finally cleared to leave she could get around in a wheelchair, but her homecoming was not what she expected.

“That was one of the worst experiences,” she said. “I was in the wheelchair and obviously I couldn’t get up the stairs. I couldn’t get into my bathroom, because the door was too skinny. I had to be carried into my house.” 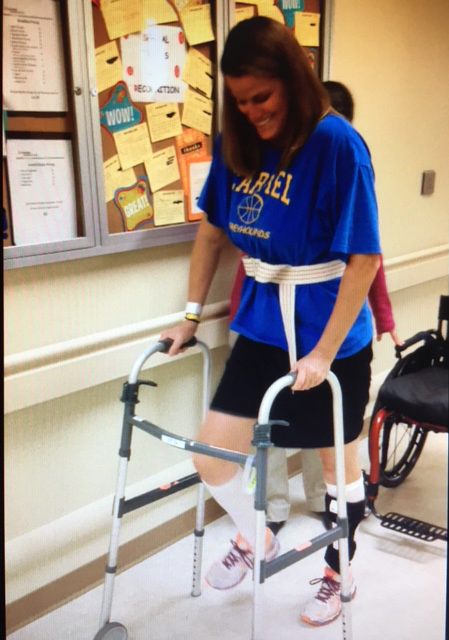 Melanie Brown uses a walker to relearn how to walk after being paralyzed by transverse myelitis in 2014.

After returning home, Brown continued rehab at an outpatient facility three days a week for six months. She went from using a wheelchair to a walker to a cane to being able to walk without assistance.

But she didn’t stop there. She started competing again, first at the 2014 Ghosts and Goblins race as a wheelchair participant. She completed her first 5K – running – in March 2015. Now, she’s registered for the Oct. 8 Indianapolis Half Marathon  and the Nov. 5 Monumental Marathon.

Training has been much more difficult than it was for the many long-distance races she completed before her illness. She runs slower, has changed her form and still suffers from balance issues and spasms. But the hard work and pain is worth it.

“(Long runs) hurt really bad. The burning really increases,” she said. “In my mind, it’s one of those things I did before, and I want to be able to do it again.”

During Melanie Brown’s time in the rehab hospital, a therapist told her about NeuroHope, a nonprofit dedicated to providing long-term care to patients recovering from serious injury, she was hoping to help open. Only the second facility of its kind in the nation, NeuroHope founder Chris Leeuw spearheaded efforts to bring it to Indianapolis after he was unable to receive long-term care in his home state after a 2010 accident left him paralyzed from the neck down.

Leeuw traveled to Utah to receive therapy from a similar facility after his options in Indiana ran out. Two years later, he returned home able to walk and live independently.

“There’s a huge void in long-term care for individuals with chronic injury,” Leeuw said. “We’re doing what we can to try to help fill the void, but we need a lot of public support to help make it happen.”

Brown has joined Team NeuroHope for the Monumental Marathon. Through the race she is hoping to fundraise and spread awareness of the nonprofit, even though she was never a patient there.

“Thinking about how fortunate I am and that I can do the things that so many people who have transverse myelitis can’t, that keeps me going,” Brown said. “I’m doing this for them and helping raise money for a facility that can help people with transverse myelitis.”

To learn more or donate to Team NeuroHope, visit cno-financial-indianapolis-monumental-marathon-half-mar.everydayhero.com/us/team-neurohope-indy-monumental-2016/members.