You are at:Home»Current in Zionsville»‘Part of the solution’: Boone County sheriff seeks tax increase to boost staffing, public safety 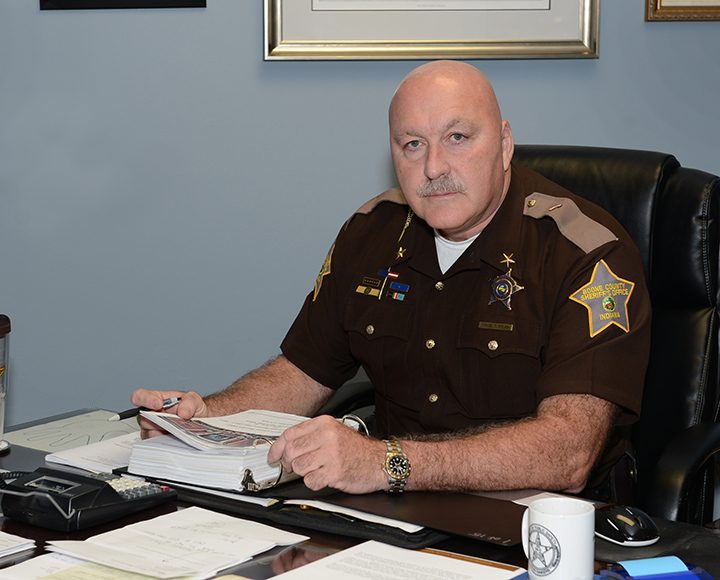 It’s no secret that Boone County is booming. Since 2010, its population has grown 12 percent, and continued growth is forecasted in the coming years. Many of its schools are bursting at the seams, and businesses of all sizes have relocated or recently opened in the area.

One thing that hasn’t changed, however, is staffing levels in the Boone County Sheriff’s Office. Despite having thousands more people to protect, the sheriff’s office hasn’t increased its staffing levels since 2004.

That’s how Sheriff Mike Nielsen, a Republican who has described himself as “adamantly opposed to any type of tax implementation,” found himself in an unlikely position less than two years after taking office: traveling the county touting the need for a tax increase. 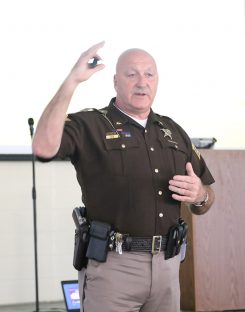 “The Boone County Sheriff’s Office can no longer sit back and only provide mediocre services at best because of our serious lack of staffing in many divisions,” Nielsen stated in an open letter to Boone County residents. “I personally decided last year after the budget hearings that we needed to partner with the County Council and provide the County Council an option for increasing revenues. We needed to be part of the solution instead of the problem.”

The sheriff has put together a five-year strategic plan based on the adoption of a local income tax or LIT. State law allows counties to implement a LIT to be used for public safety, economic development, certified shares or property tax relief. Forty-seven Indiana counties use income taxes for public safety, with rates ranging from .05 percent in Wells County to .25 percent in many others.

In order for the LIT to go into effect, elected governing bodies representing more than half of the county’s population must approve it. On Sept. 13, the Boone County Council voted in support of the tax at a rate of .5 percent, which means only the Zionsville Town Council or Lebanon City Council must approve the tax for it to go into effect Jan. 1.

Elected officials from all Boone County municipalities will hold a special meeting at 7 p.m. Oct. 11 at Lebanon High School to vote on the tax.

If adopted, a Boone County resident making $80,000 a year can expect to pay approximately $400 more in taxes annually. The county would move from having the 71st lowest tax rate in the state to approximately the 50th lowest rate, placing it among the middle of Indiana’s 92 counties.

Boone County residents have expressed a wide range of opinions on the proposed tax in recent weeks.

“It’s for the good of the public,” Bret Lee of Lebanon said after a Sept. 8 public meeting on the topic. “I don’t know any other way that they could generate (funding) if they don’t pass this.”

Rosemary Means of Zionsville spoke against the proposal at the Sept. 6 Zionsville Town Council meeting.

“I expect our public servants to properly budget, and if that means you have to readjust something then it should be readjusted,” she said. “I do not understand why the first way to relieve what sounds like years of budget shortfalls is to tax an extra tax.”

Officials across Boone County have blamed property tax caps, which voters elected to add to the Indiana Constitution in 2010, for stifling funds for public safety. Since 2010, Indiana municipalities have lost out on nearly $1.6 billion in funds because of tax caps, according to the Indiana Association of Cities and Towns. Matthew Greller, IACT executive director, said municipalities across the state are feeling the impact of the tax caps to one degree or another.

“It’s forced units of government to work more closely to find efficiencies and cost savings, but it’s also caused things to go by the wayside in terms of infrastructure and things of that nature,” Greller said.

Despite the outcome of the vote on the LIT, Nielsen foresees a difficult road ahead. He points to a sharp increase in heroin use in recent years and a rise in violent crime “overflowing into Boone County” from neighboring counties as issues local law enforcement will have to address, no matter what.

“The Sheriff’s Office simply has to change the way we are doing business today,” Nielsen stated in his open letter. “We have to provide each employee with the best tools, manpower and technology to perform their duties to the best of their ability. We simply can do much better than we are today.”

Learn more about the LIT and Nielsen’s five-year strategic plan at  boonecountyindianasheriff.com/Default.aspx?tabid=935.

If the LIT is approved, the county and each city or town in Boone County will receive a portion of the funds to use for public safety. And each entity has its own plan for spending it.

In Zionsville, Police Chief Robert Knox and Fire Chief James VanGorder have expressed strong support for the new tax, which is expected to generate nearly $4 million in additional revenue for the town within a year.

The Zionsville Fire Dept. has seen a 23 percent increase in calls in the past three years, but its staffing levels haven’t grown with the population or workload. VanGorder said ZFD is constantly three firefighters short at each of its stations.

The department is so short staffed that it has instituted mandatory overtime 15 to 20 times a year for each firefighter just to maintain minimum staffing levels, and vacations must be scheduled a year in advance.

VanGorder said firefighters expressed “unhappiness with the inability to take time off” during labor management meetings in 2015.

“The problem here in Zionsville is we are short-staffed every day, so there is little to no chance to use this earned time,” VanGorder said. “I am concerned about workplace morale. The highly skilled personnel should be able to have the same staffing levels as our neighbors.”

“Many times that phone call comes with very little notice,” he said. “I do think this situation affects morale.”

Staffing levels also affect ZFD’s abilities to do its job efficiently. The NFPA 1710 outlines minimum criteria for fire departments to work effectively and efficiently, which includes four firefighters on a fire engine – one more than Zionsville can staff. NIST reports show that it takes a three-person crew about 33 percent longer to complete tasks at the scene of a fire, which can make a big difference in how much of a home is damaged or lost.

“I’m frequently asked what keeps me up at night,” VanGorder told the town council Sept. 6. “It’s my staff, knowing that every day we send them out there to do their job short-handed.”