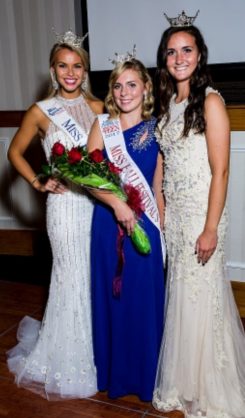 The pageant is held a week after the Fall Festival to give the previous year’s winner the chance to reign over the event. It is part of the Ms. America organization.

“I got involved in this pageant because I’ve always had a dream to do one,” Hagen said. “When I found this one and it was local, I decided to go for it.”

Her talent was a cello solo. Hagen, 16, has been playing since fourth grade. Her platform was anti-bullying. She would like to work with the Stand for the Silent organization.

“I chose anti-bullying as my platform because I feel like it is an under-represented situation in schools and communities today. I really just wanted to bring attention to it,” Hagen said. “I would love to work with Stand for the Silent. I chose them because they seem to focus on the victim’s side of bullying. I feel a lot of times we focus on stopping bullying, but we’re never concerned about the victims.”

During her reign, Hagen will participate in many events sponsored by the Lions Club. She said she will represent the community well with her leadership skills, confidence and work ethic.

She said she wants to become more involved in the community and work on her public speaking skills. She will compete in the Ms. Indiana Outstanding Teen competition in Zionsville in June.