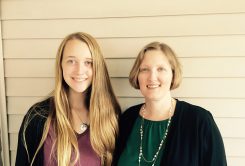 Meredith DiCamilla (left) and her mother, Kim, will perform at Carnegie Hall. (Photo by Mark Ambrogi)

A Carmel mother and daughter will have the ultimate bonding experience.

Kim has been a member of the Indianapolis Symphonic Choir for about 10 years with a break in between when she became a mother. The choir will be joined by the Indianapolis Children’s Choir, which Meredith, 14, is a member.

“I’ve always considered my participation in the ISC to be an enormous privilege, but never more than after the ‘Zabur’ world premiere last year,” Kim said. “The performance was an amazing experience for me, not only because of Zabur’s incredible beauty and powerful message, but also because of its potential trajectory.  It’s exciting to think that we breathed life into the piece for the very first time.”

“I’ve been to Carnegie Hall as a tourist but never as a performer,” Kim said. “This is a once-in-a-lifetime opportunity for us. My parents are flying up from Florida to see it. My husband is going to travel with my group. We have relatives from Delaware that are going to come. It’s a neat thing to bring all of our extended family together.”

It’s the first time the ISC has performed at Carnegie since 1978.

“It’s really cool for a 14-year-old to say I’m singing at Carnegie Hall,” said Meredith, a freshman at the International School of Indiana in Indianapolis.

Both singing groups also will perform separately at Carnegie.

This is Meredith’s fifth year performing with ICC and  it will Meredith’s first trip with her choir. ICC members plan to do some sight-seeing in New York.

“I like walking in Times Square and seeing everything,” said Meredith, who made her first visit to New York in the fall of 2015. “We saw a Broadway show (‘Wicked’). I love shows.”