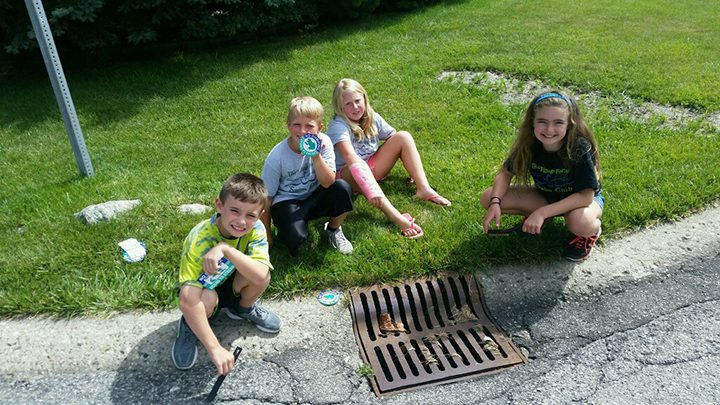 There are three lakes in Village Farms, all of which feed into Cool Creek and then the White River.

“The storm drain marking is not a new concept for the city,” Stormwater Specialist Wes Rood said. “We started our efforts in 2009 in Countryside, and in 2010 there were 186 markers placed in conjunction with the local Boy Scouts. In 2014, 50 markers were placed by the swim team for Village Farms.”

Markers include images such as frogs or fish to alert the public of the drains leading into lakes and the White and Wabash rivers.

“The connection here is that our waterways are all connected, so whatever we do upstream affects downstream, it affects the aquatic life and life in general,” Rood said.

Tom Frederickson, director of lakes management for the Village Farms Home Owners’ Association, took the lead on the project.

“We actively pursue a lot of different projects to maintain water quality and raise awareness,” he said. “One of the cool things of having kids work on a project like this is you instill in their minds at a young age that what they do in their yard or street does pass on to water quality.”

The City of Westfield has a partnership with the White River Watershed Alliance, and Rood encourages residents to take a pledge to allow for cleaner water.

“There are a multitude of pledges,” Rood said. “The idea behind the pledges is you, as a resident, pledge to clean up pet waste, use only so many gallons of water a year or only using certain types of fertilizer and minimizing application.”

To take a pledge, visit clearchoicescleanwater.org.