You are at:Home»Current in Westfield»Hamilton County Parks opens its portion of the Monon Trail 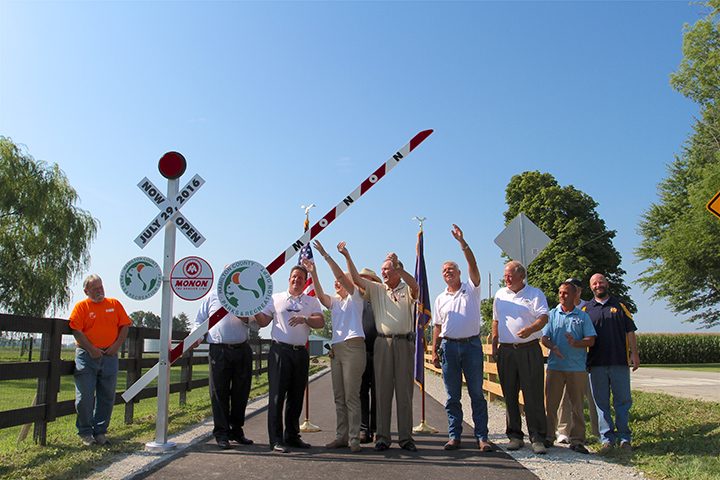 The Monon Trail is celebrating its 20th birthday of becoming a walkable, rideable, recreational path through the state.  Formerly, it was a popular rail line from Indianapolis to Chicago and Louisville, Ky. to Michigan City, Ind., dating back to 1846.

And now, 170 years later, Hamilton County Parks and Recreation is celebrating the Monon’s rich history by completing development of another 3.2 miles of the trail from 216th Street west of Noblesville, connecting to Sheridan’s portion of the trail at Lamong Road, just south of Ind. 38.

Connections of the Monon Trail are scattered throughout counties originally associated to the rail line. Hamilton County, however, and its municipalities have made strides in connecting Indianapolis to Carmel, extending a developed trail north throughout the entire county.

At 10 a.m. July 29, Hamilton County Parks and Recreation invited Hamilton County elected officials, which included all three county commissioners Christine Altman, Steve Dillinger and Mark Heirbrandt; county councilors Steve Schwartz and Brad Beaver; contractors for the project, 3D Company, Inc,; representatives from Butler, Fairman & Seufert, the land acquisition consultants and project designer; and media for an unconventional “ribbon-cutting,” honoring the history of the Monon, which consisted of lifting a railroad level crossing to give access to the paved trail at the trailhead at Lamong Road, where the trail connects to Sheridan’s portion.

“At Hamilton County Parks, we don’t always do things the easy way. Somebody said (for this event), we’ve got to get the ribbon and scissors, and we said, ‘Nah, we don’t want to do ribbon and scissors,’” Hamilton County Parks and Recreation Dept. Director Al Patterson said. “So, a really, really special thanks to (woodworker) Mike Roudebush for, within a week, taking this idea and turning into a reality in the woodshop.”

Although construction began in January, this particular section of the trail has been nine years in the making.

Patterson said the project was made possible by an 80/20 matching grant from the Indiana Dept. of Transportation’s funding program. The project started in 2007 with a $1 million grant for the land, followed by an additional $554,000.

“So, we got 80 (percent funding) from the federal government. Hamilton County matched 20 percent,” Patterson said.

The project also came in under budget upon completion by approximately five percent of its $1.1 million budget, saving approximately $55,000.

“We had 26 parcels of land that we had to purchase, and not all of them were easy,” Patterson said. “Our original budget in our original grant for land acquisition was $1 million, and I think we got all of the land for about a third of that.”