You are at:Home»Current in Westfield»Frontier installs free Wi-Fi in downtown Westfield 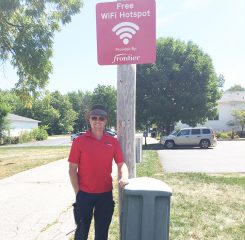 For the market, most vendors use cell phone coverage to allow for credit card purchases for buyers. However, when an AT&T outage occurred, disabling the vendors from conducting sales to the majority of buyers, Frontier Communications realized something needed to be done.

“A need arose with spotty cell phone coverage and an outage at one time,” said Tom Warner, general manager at Frontier. “That was the catalyst that basically we need to provide Wi-Fi there, if there was to be an outage so the merchants can use mobile credit card transactions.”

The free Wi-Fi was installed last month, and market goers and vendors have already begun to take advantage of it. However, Downtown Westfield Association Executive Director Teresa Skelton said that other events can use the hotspot, as well.

“We are very happy with the cooperation we got from Frontier with our city market and putting a hot spot up for our vendors,” Skelton said. “What I would like to see, because we fixed up the stage through a sponsorship with Sundown Gardens, is that all of that will be there for everyone to use. Any events until the plaza is built and under construction … that’s a nice little spot to use.”

Warner said the hotspot was installed by Andrew Bouse, a Westfield resident and market volunteer. In the future, it is possible Frontier will install more hotspots around the city.

“It all comes down to where we have facilities in the area, but if this is really successful and we get good feedback, then yeah,” Warner said. “Community Wi-Fis get expensive, but just to have a small hotspot in a few areas, that’s very doable.”