You are at:Home»Current in Westfield»Dining, parking signs installed downtown to aid in construction 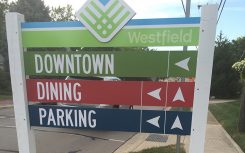 An example of one of the four signs installed around downtown Westfield. (Photo by Anna Skinner)

Until the Grand Junction Plaza is installed, there will be construction around downtown Westfield, possibly affecting local merchants. To combat the possible loss of business, Teresa Skelton, executive director of the Downtown Westfield Association, took the lead in creating four signs to be installed around the downtown area.

The signs promote dining, parking and downtown, and point drivers in the right direction.

“It needed to happen. We want our merchants to be successful, and we have a huge construction zone down there. That’s the initial push,” Skelton said. “I also hear people bring up about parking all the time, and I think that it’s important to know we have public parking all over the place.”

“I had raving reviews from the people on Park Street. They were very happy and very grateful that we did that,” Skelton said.

Skelton said that once Grand Junction Plaza is finished, the signs will likely change.

“There will be more permanent signs with more specifics on them, but we didn’t want to get too nailed down on that because we hope to have more merchants and more dining. Things change,” she said. “I think (the signs) will help with construction. That was the big push to try to get people (out).”