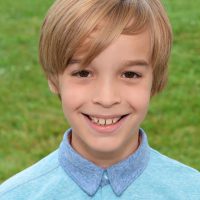 Mitchell Wray is set for his next acting adventure. This one will take him to 15 cities in a six-month stint with the “Finding Neverland” touring company.

“It’s one of my favorite musicals, so I think it’s going to be really awesome,” said Mitchell, who has had several roles in Indianapolis-area productions and appeared in a yet-to-be released movie “Crossroads of America.”

Mitchell, an 11-year-old Carmel resident, has been double cast as Peter Pan and Jack in “Finding Neverland.” The Harvey Weinstein-produced musical ended its Broadway run Aug. 21 and will begin its national tour in October.

“Mitchell and another boy will alternate roles of Peter and Jack,” said his mother Chauncie Wray.

Mitchell said he has never prepared for two roles in the same show.

“I think it’s going to be a challenge, but I think it will be really awesome,” Mitchell said.

Mitchell said he is most looking forward to working with the rest of the boys in the cast.

After auditioning in New York, Mitchell and his mother flew home.

“Right when we got to the Indianapolis airport, they say we’re going to need you back (today),” Mitchell said.

They returned to New York the following day, and he was offered the part shortly thereafter.

After rehearsing in New York for a few weeks in September, the cast will begin setting up for the first performances in Buffalo, N.Y., opening Oct. 7.

The tour will stop in Chicago from Nov. 22 to Dec. 4 and then lands in St. Louis. The final show for Mitchell’s contract will be April 9 in San Diego.

“Ninety-nine percent of these cities I’ve never been to, so I think it will be really fun,” said Mitchell, who is taking dance and vocal lessons to help him for the musical.

Chauncie said many friends want to see Mitchell in Chicago, but she has been warning them to wait to buy tickets until she knows what role he would play. She expects to know that a few weeks before those performances.

There is a possibility of continuing the tour after six months if Mitchell is offered and accepts a contract extension.