You are at:Home»Current in Zionsville»MyArt moves to bigger space in the Village 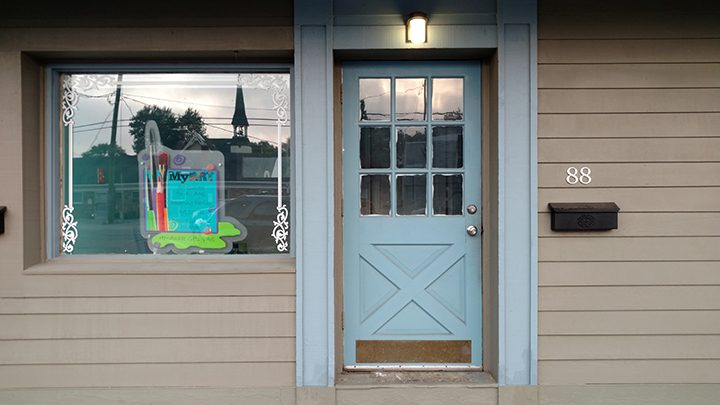 Myart recently moved into a new building that nearly doubled the space of its previous location. (Photo by Heather Lusk)

Having to turn away artists is not something Buffe Challand wanted to do.

So when the owner of MyArt found a larger location in the village, just a few blocks from her Cedar Street studio, she pounced on it.

“That was one of my biggest things,” she said, referring to not having the space for private groups who wanted to use the studio after school when she already had her own art classes scheduled.

Her new location, 88 N. First St., is 1,000 square feet, nearly doubling the 600 square feet of the previous space. What was once an accountant’s office is being converted into two classroom spaces over the next few weeks so that she can accommodate two groups simultaneously whether private events or classes. It also offers a waiting room and larger parking lot.

“You couldn’t really fit in another teacher where we were before,” she said. “It’s a much better situation with being able to close doors and maybe offer some semi-private art lessons.”

She had been thinking about the idea of a bigger space and kept her eye on locations in the village.

“I’m the kind of person to jump at an opportunity when I see it,” she said. “I thought this was great.”

In similar fashion, Challand jumped at the chance to purchase MyArt in March when previous owner Barb Hegeman decided to sell the business to focus on her own art projects.

Challand said she’s been able to add many new classes for this fall, including a sketchbook class for ages 9 and up, teaching the importance of using a sketchbook to develop ideas and help with creativity, and a portfolio class for teens and adults interested in pursuing an art career. Private parties can be scheduled by contacting Challand through myartindy.com.