You are at:Home»Current in Zionsville»Neighborhood proposed along Oak Street at ‘gateway of some change’ 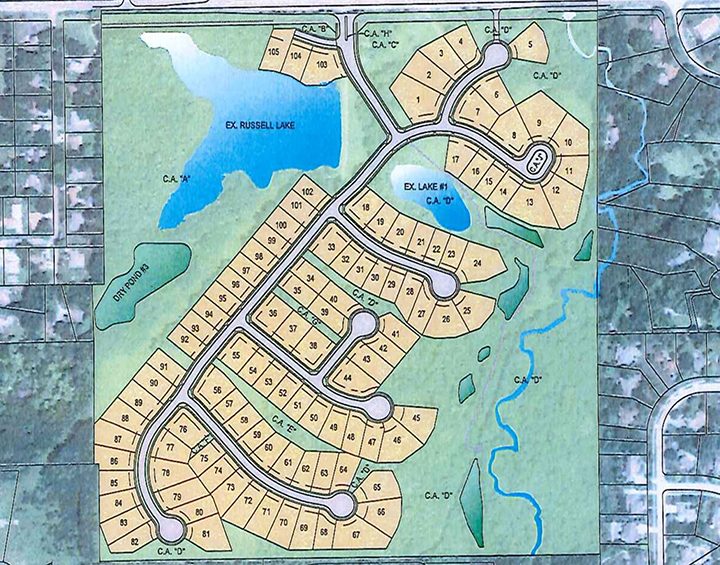 The Cobble Creek neighborhood is proposed along Oak Street between the Russell Lake and Thornhill and Spring Hills neighborhoods. (Submitted photo)

The Zionsville Plan Commission is taking another month to review plans for a proposed neighborhood south of Oak Street in an area described by Zionsville Director of Planning Wayne DeLong as “at the gateway of some change.”

Pulte Homes is seeking to build 105 houses targeted at empty nesters on approximately 100 acres south of Oak Street between the Russell Lake, Thornhill and Spring Hills neighborhoods. The commission reviewed the primary plat and development plans at its Aug. 15 meeting but delayed a vote after neighbors and commissioners expressed concerns about increased density, traffic and its impact on schools.

Curt Smith, a Zionsville resident who owns two acres near the proposed development, said he was concerned about density and the expected “urbanization” of the area.

“This just strikes me, as someone who knows this community well and who has been here for a long time, as inconsistent with Zionsville’s plan and self-image,” Smith said. “I’m rather surprised.”

Tim Ochs, an attorney speaking on behalf of Pulte Homes, said the zoning of the 100 acres allows for 144 homes to be built on it. Much of the land is not fit for building, however, and is planned to be used for natural areas and trails. DeLong said the lot sizes exceed the minimum requirement of 5,000 square feet.

Commissioner Larry Jones questioned the petitioner about the neighborhood’s potential fiscal impact on Zionsville Community Schools, wondering how so many new homes would lead to a very few number of additional students. Pulte Homes Vice President David Compton said the homes, which are expected to be 2,600 to 3,400 square feet and cost $525,000 on average, will be marketed to “affluent empty nesters.”

“The buyer desires the space when kids come home from college,” he said.

Several residents said they worried about increased traffic on an already busy corridor. Commissioner Kevin Schiferl agreed and wanted to see a report on the potential impact.

“I’m getting personally sick of having petitions come up in a growing area that’s becoming more urbanized without traffic studies,” he said. “It’s a safety issue for our community that we have to come to grips with.”

The commission is expected to address the issue again at its September meeting.

Residents expressed concern about urbanization, a term that can have two meanings in Zionsville, according to DeLong.

“With the introduction of additional sanitary sewer capacity (as planned with the project), it can be anticipated that the corridor (Oak Street) will experience some level of change,” DeLong stated in an email, citing an increase in development of open land and pedestrian pathways as examples.

Areas in Zionsville can also become “urbanized” by transitioning from the rural to the urban district. When this happens, public services such as law enforcement and road maintenance switch from being provided by Boone County to being provided by the town.