You are at:Home»Current in Carmel»Wilks and Wilson spreads in Indiana, Vegas with craft cocktails 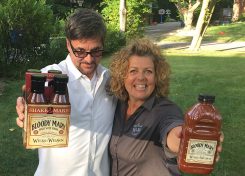 Wilks and Wilson began in 2012 with Greg Wilson and Zach Wilks aiming to bring a pre-Prohibition era cocktail scene to the bars and restaurants of Indianapolis.

Now, three years later, the company has its sights on a city a little bit bigger.

“Our products are designed to allow anybody to make a superior craft cocktail with the spirit of their choice,” said Carmel resident Vince Freeman, president and CEO of Wilks and Wilson. “We think Las Vegas is going to be the home run for us.”

The company produces a line of eight elixirs, which are nonalcoholic, cocktail-flavored syrups, and three bitters, along with the company’s Bloody Mary mix.

“The big thing we came out with is just hitting the market right now, it is the ready-to-drink Bloody Mary, and it is big on golf courses and big on tailgate season,” he said.

Freeman said elixirs are popular at busy bars, where drinks such as mojitos can be made quicker with the flavored syrups.

The company also plans to release next year a ready-to-drink Moscow mule.

Wilks and Wilson products aren’t only national. They are found in local bars and restaurants, as well. The Stacked Pickle, Café Patachou and Asian Fusion are a few local bars offering the products.

Indiana Brand Ambassador Brenda Coleson, of Carmel, is often the first to introduce Wilks and Wilson to bars and restaurants in the state.

“I watched as the conception became reality with Wilks and Wilson and was pleased to be involved with two of the product release parties,” she said. “From there, I knew I wanted to get involved with the company on a more permanent basis because of the solid team of people who have so much energy to bring the Wilks and Wilson products to life.”